Since today is the first day of the final month of 2013, I thought I would post about my reading plans in 2014.  I’ve discovered that I don’t like having to follow a long list of books.  I’m going to continue reading for The Classics Club and my goal of reading 60 classics in three years.  It’s just that my final list of 60 won’t look like my original list.  In 2013, as I read a book that I considered a classic and it wasn’t already on my list, I simply added it and took another book off the list.  I’ve read 22 classics in 2013, so I’m meeting my goal. Back in February, I bought The Count of Monte Cristo and it’s been sitting on my dresser ever since – taunting me.  So in 2014, Alexandre Dumas’ novel will be my one-book reading project.

My favorite reading project of 2013 was my Deal Me In short story project.  Apparently, I don’t mind following a long list of short stories.  Ever since my former book group, the Indy Reading Coalition, started reading short stories every July, I have become increasingly more appreciative of this form of fiction.  One of the members of this book group, Jay at Bibliophilopolis, started a project a few years ago where he selected 52 stories that corresponded with each card in a regular deck of cards.  Since there also happens to be 52 weeks in a year, he randomly selected a card each week and read the story that went with that card.  In 2013, I joined him in doing this with my own list of short stories and found it to be a fun project that was easy to stick to throughout the entire year.  Well, I still have four stories to go for this year, but I think I’m going to make it.

For 2014, I’ve put together another list of short stories (I’ve come up with 48 stories and made 2’s wild).  I’m looking forward to randomly reading these over the next year.  In determining which stories to use, I feel like I left some authors out; however, even though William Trevor and Haruki Murakami didn’t make the list, I plan on reading ad hoc stories and novels from these authors.  I also feel like I snubbed Jack London by only putting two of his stories on the list, but since he is the author I’ve posted about most on my blog, I don’t feel that bad.  And I’m fairly certain I will be reading more of his work in the coming year.

What are your plans for reading in 2014?

Having read J.D. Salinger’s short story “A Perfect Day for Bananafish” this week, I was reminded that I had seen a title of a short story called “A Perfect Day for Kangaroos”. Being positive that it was a Mark Twain story, I scoured through my short story collections, but couldn’t find it.  I finally had to look it up on the internet and discovered that I had seen it in the table of contents of Haruki Murakami’s collection Blind Willow, Sleeping Woman.  And since I went to the trouble of figuring out who wrote it, I figured I might as well read it. 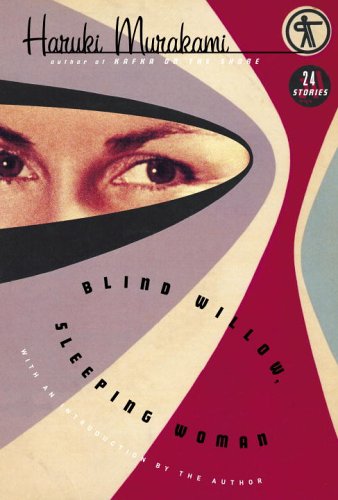 Completely different in tone from the other Murkami works I’ve read, I had a little trouble getting in to it; however, a couple going on a date to a zoo to see a recently-born kangaroo has a little of that Murakami oddness to it.  The couple has a few relatively friendly little spats while admiring the kangaroos.

One minor detail jumped out at me (no pun intended).  While the narrator of the story waits for a hot dog and a Coke, he mentions that the vendor has a boom box playing Stevie Wonder and Billy Joel.  Did this mean the story was set in the 80’s?  Possibly.  I can’t help question why this little piece of information was included.  What was important about placing the story in a specific time?  The answer to the question isn’t really that important to me.  I think Murakami tends to like questions more than answers.

Just recently, I watched the John Wayne movie, The Searchers, as I saw it on a list of top ten best movies that never won an award.  I really enjoyed it and now I’ve found it intriguing that I’ve read a short story where another John Wayne movie, Fort Apache, is central to the story.  I use the term ‘central’ loosely as the story is Haruki Murakami’s “Blind Willow, Sleeping Woman” from his collection of short stories of the same name. The only other Murakami work that I’ve read is his more recent novel 1Q84.  “Blind Willow, Sleeping Woman” has the same surreal touch.

For me, the John Wayne reference seemed central, even if the story toggled back and forth between a current hospital visit and a reminiscing about another hospital visit – and it included a story within the story about a sleeping woman who has blind willow flies crawl into her ears.  When asked if the flies ate the woman’s insides, the storyteller answered “in essence”.  Much of the story appears to be “in essence”.

The relationship between the narrator and his younger cousin impressed me.  It was a real relationship in a surreal story.  The two make a routine visit to a hospital for the ear problems of the younger cousin when the John Wayne movie comes up.  The cousin discusses a point in the movie when John Wayne tells a colonel that if he spotted Indians it meant they weren’t really there.

Murakami makes the inclusion of a western movie and movie star blend into an eastern story.  By the end, the narrator finds himself briefly in “a strange, dim place.  Where the the things I could see didn’t exist.  Where the invisible did.”  Whether this is a western thought or an eastern thought, I’m not sure.  Maybe that’s what Murakami intended.

This story popped up on my radar when I read Jay’s post about it at Bibliophilopolis.  Since I drew the two of diamonds, a wild card, I thought I would give it a try.  I’m glad I did. I think more Murakami will be included in my future reading.

Top Ten Tuesday is a meme hosted by The Broke and The Bookish.  So far it’s been a fun way to find out what others are reading and get some good ideas on books to read in the future.  This week the topic is Top Ten Books Read During the Lifespan of Your Blog.   Even though my blog is less than a year old and I haven’t read as many books compared to some blogs I’ve visited, it was still difficult to determine exactly which books I would include in my list.  Here’s what I came up with (not in any particular order):

1.  We Make A Life By What We Give by Richard B. Gunderman

2.  When I Was A Child I Read Books by Marilynne Robinson

4.  The Amazing Adventures of Kavalier and Clay by Michael Chabon

5.  The Sea Wolf by Jack London

7.  Year of Wonders by Geraldine Brooks

8.  For Whom The Bell Tolls by Ernest Hemingway

But a narrative takes its own direction, and continues on, almost automatically.  And whether he liked it or not, Tengo was a part of that world.  To him, this was no longer a fictional world.  This was the real world, where red blood spurts out when you slice open your skin with a knife.  And in the sky in this world, there were two moons, side by side.

Fantasy? Science Fiction? Mystery? Romance? Something just plain weird?  All of the above? Probably.

A ten-year old girl takes the hand of a boy in her grade school class without saying a word – then lets it go.  Soon after, she disappears from the boy’s life.  Twenty years later, both still have the moment seared into their psyche.  Strange and unusual circumstances begin to bring Tengo and Aomame together, but something also seems to want to keep them apart.

Haruki Murakami’s novel 1Q84 reminded me of the television show Lost.  Numerous little pieces of a large story get intertwined to keep you guessing and wondering how the story will finally wrap up.  Murakami makes several “nods” to Charles Dickens in this novel.  I had read somewhere a while ago that the Lost creators were huge fans of Dickens.  I have a feeling that Murakami might also be a Dickens fan.  Murakami skillfully includes minute details in his story that end up being important later on, similar to both Lost and Dickens. Murakami also makes several references to Anton Chekhov, a writer I’m not as familiar with but want to be.

Throughout the novel, the reader is never sure what is actually real and what is not.  Are the characters in this world or another world?  Murakami’s writing can take on a beautiful dream-like quality that enhances this question.  Unlike the TV show Lost, I was fairly certain how the novel would end.  And also, unlike Lost, I was right.  I think it’s the sign of a great writer when a reader can tell which way a story is going to end and still be wow-ed by the ending.  Surprise is sometimes overrated.

However, I just couldn’t shake one question about the novel.  Somewhere in the middle, Tengo describes some sort of vision/daydream that involves Sonny and Cher on Noah’s Ark with two pythons.  This was one of those minute details that just didn’t seem to have any significance other than to make me wonder – which perhaps is significant.  Oh well..the beat goes on…