I read Hans Christian Andersen’s short story “The Last Dream of the Old Oak” and I’m seeing a theme running through his stories – or at least the ones I’ve read recently.  The theme that nothing lasts forever seems strange for fairy tales, but somehow it works.

The oak tree in this story is 365 years old.  One year is like a human day to the tree.  It is awake for three seasons and sleeps during the winter.  During the course of the story, a fly enjoys buzzing around the oak’s branches.  The fly’s life is only a human day.  The oak has difficulty understanding how the fly could be so happy when his life is so short.  The fly’s answer, while in fairy tale language, is essentially: it’s all relative.  The fly is perfectly happy with it’s lifespan so why should the oak be sad for it.  Personally, the idea of time being relative is a pleasant idea, especially within a fairy tale of this sort.  It’s not something I would have any problem sitting around pondering for a long time – even if I wouldn’t come up with any type of concrete conclusion.  Unfortunately, there are pesky things like “a job” that keep me from pondering these things as much as I would like.  Maybe that’s a good thing?

Eventually the oak goes to sleep for the winter and has a dream that it’s summer.  In the dream, it grows taller and taller and brings the rest of the forest along with it, growing up and up into something that might be called heaven.  In the real world, the tree has been uprooted by a storm on Christmas Day and sailors, who had used the tree as a guide when they came to shore, sing a carol over the dead tree.  So the dream isn’t real – it’s just a dream.  Or is it?  Something else to ponder.

The collection of Hans Christian Andersen stories that I have uses the term “brave” in the title of the story”The Brave Tin Soldier”.  I’ve heard this story referred to as “The Steadfast Tin Soldier”, also.  I would say that either word works.  I think this short work is my favorite Andersen story that I’ve read so far.

The title character is one of twenty-five toy soldiers; however, he was the last one made as the maker ran out of tin, so he only has one leg.  Across the play room, he sees a motionless paper princess in mid dance, standing on one leg.  In order to get to the princess, he makes a deal with the Black Goblin.

During playtime one day, he falls outside from the window.  He embarks on waves of adventure (at least for a toy soldier) in which he remains both brave and steadfast, keeping the paper princess firmly in his mind and heart.  This adventure brought forth the question: why is this happening?  Is the soldier lead by the Hand of Fate?  Or the Black Goblin?  For me, it seemed Fate finally brought the Tin Soldier together with the Paper Princess.  Perhaps it was the Goblin who stepped in later.

In true fairy-tale fashion, while the ending could be considered horrific, Andersen manages to make it simply bittersweet.

‘Rejoice with us…Enjoy thine own bright life in the fresh air.’

I’ve heard a saying that goes something like this:  life is lived forward but understood backwards.  It’s been attributed to Soren Kierkegaard, but I don’t have documented evidence.

The title character in Hans Christian Andersen’s “The Fir-Tree” experiences this phenomenon in fairy-tale fashion.  It whittles away it’s life wishing for more.  It spends it’s younger days wishing it was older while the birds, rabbits, wind and sun of the forest tell it to kick back and enjoy itself right where it is.  It only begins to understand the happiness of  it’s life in the forest when it’s chopped down.  It spends one glorious night getting decorated for Christmas, hearing the story of ‘Humpty-Dumpty’ told to excited children only to get thrown into a dingy, dark attic the next day.  It retells the Humpty-Dumpty story to many, many mice over the course of several days until he tells it to a couple of rats who don’t think it’s such a great story.  Through all of this, the Fir-Tree never understands the good times until they are gone.

I’m sure that at some time Hans Christian Andersen’s story “The Ugly Duckling” has been animated, but I’m not sure if it’s been Disney-fied (maybe it has, I just can’t remember it).  I read Andersen’s original story this weekend and was confronted with some questions about fairy tales in general.

I noticed no magic in this story.  Andersen beautifully describes the countryside and I am sure readers may think of nature itself as magical.  I wouldn’t disagree with them, but that’s not the magic of which I’m thinking.  Casting of spells, magic wands, and fairy godmothers are not included.  Animals talk; however, I consider this more literary device than magic.  Readers need to know what the animals are thinking and how they are acting.  Talking animals is as good of a way to find out as any.

I won’t go into details about the story because it’s familiar.  If by chance someone is not familiar with it, I highly recommend and encourage them to read it.  I have to ask myself the question, though:  what makes a fairy tale a fairy tale?  Does it have to include magic?  And if so, what kind of magic?  Are talking animals enough to consider a story a fairy tale?

The answers to these questions don’t really have any bearing on my enjoyment of the tale – which I enjoyed very much.  The questions just popped up as I read it.  Any fairy tale experts out there?

I’ve had several conversations over the years about the differences between original fairy tales and their Disney-fied versions.  I decided this week to read Hans Christian Andersen’s original version of “The Little Mermaid”.

To my surprise, it is apparent that the Disney creators actually read the original story.  Several small details that were exquisitely described by Andersen are in the movie.  Specifically, this includes the fireworks on the prince’s ship and the little mermaid’s red hair.  Well, in the story, she just has a lot of red flowers in her hair.  In the movie, her name is Ariel, in the story she has no name.

However, there are differences.  While the little mermaid is entranced by the world of humans, it is also told to her that humans have immortal souls, while mermaids do not.  The only way a mermaid can get an immortal soul is to get a human man to forsake his parents for her (in other words, get married), then she can become one with his soul.  If a man marries another woman then, the mermaid would turn into seafoam on the morning of the wedding.  I will point out that the story does not indicate what mermen have to do.

Much like the movie, the little mermaid makes a deal with the devil…I mean, the sea witch… and exchanges her voice for the chance to have legs and live on land with humans.   She attempts to attract the handsome prince that she saved from drowning (like in the movie).

The big difference between the story and the movie, though, is the ending.  I believe this tends to be where most of the differences between stories and their Disney versions occur.  As you may have guessed, the prince does not marry the little mermaid and she turns into seafoam.

But the story doesn’t end there.  After the little mermaid is turned into seafoam, she is floating around in some sort of mermaid purgatory where other mermaids who have been turned into seafoam tell her that she can get an immortal soul and go into heaven if she does good deeds for 300 years.  Every child that she makes laugh will take some time away from the 300 years.  Every child that cries, will add time to the 300 years.

The movie version has Ariel live happily ever after with her prince on land as a human with her father’s blessing.

Given the fact that I am reading Rudyard Kipling’s stories, I may have to do some comparisons of his Jungle Book stories to the Disney version, although I’ve already read that Walt Disney simply used the characters from Kipling’s works to make his own movie. 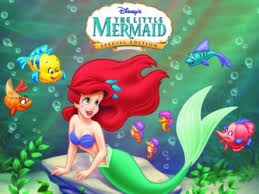