While the music of the young people is great, the stories that Aunt Hager tells Sandy provide an insight into how deeply the old people feel things. It’s a little sad as Aunt Hager has each one of her three daughters, including Sandy’s mother, move away from her. Sandy is left alone with his grandmother and becomes the man of the house helping with the wash that Aunt Hager does in order to pay her mortgage.

Some of the talking that Aunt Hager does in this chapter might not meet today’s standards; however, through the rough times, the grandmother has managed to keep an eye on love and I’m not sure love needs any standards to live up to:

…years of faith and labor, love and struggle filled Aunt Hager’s talk of a summer night, while the lightning bugs glowed and glimmered and the katy-dids chirruped, and the stars sparkled in the far-off heavens.

Here are my other posts about Langston Hughes’ Not Without Laughter:

I guess I’m especially enjoying the chapters in Langston Hughes’ Not Without Laughter that have something to do with music. In chapter VIII, “Dance”, Sandy’s Aunt Harriet and her boyfriend, Mingo, sneak him out to a dance. Getting to see this through the eyes of a ten year-old boy is great enough as he stands around looking innocent while the older teenagers give him a nickel here and there to buy creme sodas.

But what makes it even better is the poetry and lyricism that Hughes uses to describe the music. Each instrument takes on its own personality:

Wah! Wah! Wah!…The cornet laughed with terrible rudeness. Then the drums began to giggle and the banjo whined an insulting leer. The piano said, over and over again: ‘St. Louis! That big old dirty town where the Mississippi’s deep and wide, deep and wide…’ and the hips of the dancers rolled… while the cynical banjo covered unplumbable depths with a plinking surface of staccato gaiety, like the sparkling bubbles that rise on deep water over a man who has just drowned himself…

Yeah! That’s it! And then this:

Whaw-whaw!…Whaw-whaw-whaw! As though the laughter of a cornet could reach the heart of loneliness.

What more needs to be said!

In the starry blackness the singing notes of the guitar became a plaintive hum, like a breeze in a grove of palmettos; became a low moan, like the wind in a forest of live-oaks strung with long strands of hanging moss. The voice of Annjee’s golden, handsome husband on the door-step rang high and far away, lonely-like, crying with only the guitar, not his wife, to understand; crying grotesquely, crying absurdly in the summer night…

Langston Hughe’s 1930 novel Not Without Laughter is formatted like many novels from the 19th century. Each chapter has both a number, a title and its own “mini” story that ties into the novel as a whole.

Chapter V is titled “Guitar” and it takes a break from the previous four chapters in that Jimboy, Sandy’s father, has come home after being gone for a while looking for work and eventually finding it. Sandy’s mother, Annjee, works as house keeper for a white family and Annjee’s mother, known in the community as Aunt Hager, does laundry in her home. Aunt Hager isn’t a fan of her daughter’s husband in that she doubts how hard he actually looks for work and how hard he tries to keep it. The fact that Jimboy is gone for long periods of time doesn’t help.

But in this chapter, the evening sets in and Jimboy pulls out his guitar and plays for the family and the neighbors. Even Aunt Hager puts her feet up and grudgingly enjoys the time of relaxation. It doesn’t matter that much for a brief moment how ambitious Jimboy is. His music lets everyone know that they can lay back and take a break from work – and life.

In an understated manner, maybe Hughes says that Jimboy’s talent has a place, too. He and his guitar have a purpose and benefit for his family and friends even if it doesn’t bring in the money they need. I get the feeling that Aunt Hager isn’t done with her doubts about her son-in-law, but for one evening, it was nice to see them possibly come to an understanding.

…Nancy Lee did not hesitate in her choice of a color for the possible frame, since she could still see her picture clearly in her mind’s eye – for that picture waiting for the blue frame had come out of her soul, her own life, and had bloomed into miraculous being with Miss Dietrich’s help.

Langston Hughes is quickly becoming one of my favorite short story writers and “One Friday Morning” moves him another step in that direction.

He develops the character of Nancy Lee, a high school art student, with the same type of artistic descriptions of Nancy that she uses to describe her artwork. Nancy is deserving of the top art award and almost gets it. The reason she doesn’t get it has nothing to do with her artwork itself.

In her painting, Nancy Lee includes an American flag. She also knows there will be an American flag at the award ceremony. Many, by today’s standards, may see Nancy Lee’s faith in the flag as idealistic and even a little naive.

This story is included in Black American Short Stories: A Century of the Best edited by John Henrick Clarke. I read it when I selected the Queen of Spades for Week 19 of my Deal Me In 2021 short story project. Check out my Deal Me In list here. Deal Me In is hosted by Jay at Bibliophilopolis.

When I get through with you, sir, you are going to remember Mrs. Luella Bates Washington
Jones.”

I think the above quotation is the key to Langston Hughes’ short story “Thank You M’am”. After Mrs. Luella Bates Washington Jones finally lets go of Roger, the teenage boy who tries to steal her purse, Hughes indicates that he never sees her again. But that doesn’t mean he doesn’t remember her.

As the reader, its nice to think that Roger wouldn’t forget Mrs. Luella Bates Washington Jones and the way she treated him.

The story has a sense of being a children’s story and its certainly a good one for children to read but at least this one year older adult thought it’s just as appropriate for us, too.

‘Huh! That wasn’t no Santa Claus…’

In “One Christmas Eve”, Langston Hughes gets the city sidewalks and the busy sidewalks dressed in holiday style – as the song goes. He gets that in the air there’s a feeling of Christmas. He puts this wide-eyed innocence into five year-old Joe.

Joe takes all this with him as he enters a White-only theater to see Santa Claus. He leaves knowing racism exists. Joe’s slightly frustrated mother attempts to help him deal with the hate he experiences without diminishing the joy with which he entered the building.

That parents wouldn’t have these dilemmas to figure out – there’s a Christmas wish for the new year.

This story is included in the anthology A Treasury of African-American Christmas Stories edited by Bettye Collier-Thomas.

…he belonged to neither race; and the pride of one, the helplessness of the other, kept him hovering alone in the twilight a great sin has brought to overshadow the whole land.

I selected the Jack of Spades for Week 12 of my Deal Me In 2015 project and read Louisa May Alcott’s short story “The Brothers”.  This is the second story I’ve selected in a row that deals with racism in the United States and my first story this year from the Nineteenth Century.  My Deal Me In 2015 list can be seen here.  Deal Me In 2015 is sponsored by Jay at Bibliophilopolis. 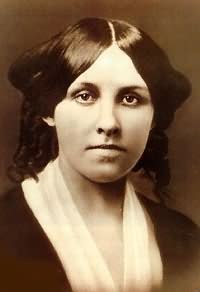 Unlike last week’s story, Langston Hughes’ “Red-Headed Baby”, in which Hughes primarily shows the story happening as opposed to telling it, Alcott’s story is almost all “telling” from various points of view.  This may be why Alcott’s story is not as well-known and not considered as strong; however, I still think it works and found it worth reading.

The primary point of view is from an abolitionist nurse during the American Civil War who finds herself taking care of a Rebel Captain.  Alcott skillfully creates a strong character as the nurse determines in her mind that though the soldier stands for everything she is against, she will do her best to not let him, or anyone else, die.

A freed slave is hired to help the nurse until he discovers the Rebel Captain.  At that point, the former slave tells the nurse his story and the troubled background he shares with the patient. It’s more difficult for the slave to share the same strength of character as the nurse, but the nurse persuades him to move on. Through the story of another freed slave several months later, the nurse discovers the outcome of her attempt at reconciliation.

At times, Alcott – through the voice of the nurse – becomes a little preachy, explaining things to the reader that most readers would not need explained.  Of course, that could also be from the fact that I’m reading this story 150 years after it was published.

This is the first of Alcott’s work that I’ve read and it makes me want to read more.  Other than Jane Austen, Alcott seems to be one of the more popular “classic” authors around the blogosphere.  She’s most famous for her novel Little Women which I bought recently for my youngest daughter but have not read myself.  I might have to make that a priority this year.

I’ve always heard one of the rules of good story-writing is “show, don’t tell”.  Langston Hughes skillfully demonstrates this concept in his short story “Red-Headed Baby”.  If I would tell this story, it would simply be a caucasian sailor stops off the coast of Florida to visit a woman of mixed race with whom he had an encounter three years ago.  The result of that encounter – whether the sailor wants to admit it or not – is the title character.  I don’t feel I’m giving anything away by telling the story because the way Hughes shows the plot is what makes the story worth reading – and what makes it masterful.

Hughes writes the story using conversations with the characters involved – some of them one-sided – juxtaposed with poetic paragraphs that share the mood of a character or the geography of the setting.  From the information in the foreword to this story, Hughes is known more for his poetry than his prose, so it shouldn’t be a surprise that these passages exist and that they work so well:

Rickety run-down huts, under palm trees.  Flowers and vines all over.  Always growing, always climbing.  Never finished.  Never will be finished climbing, growing.  Hell of a lot of stars these Florida nights.

Betsy’s red-headed child stands in the door looking like one of those goggly-eyed dolls you hit with a ball at the County Fair.  The child’s face got no change in it.  Never changes.  Looks like never will change.  Just staring – blue-eyed.

The majority of the story is from the point of view of the sailor and it’s no surprise that he’s not the most likeable person.  The racism and bigotry – and hatred – flow with considerable depth with so few words and Hughes doesn’t have to tell this to  the reader.  He shows it loud and clear.

I read this story by drawing the Six of Clubs in my Deal Me In 2015 short story project.  My Deal Me In 2015 list can be seen here.  Deal Me In 2015 is sponsored by Jay at Bibliophilopolis. This story is included in my copy of The Oxford Book of American Short Stories edited by Joyce Carol Oates.