A long time ago, prior to my blogging, I started reading the stories in Rudyard Kipling’s The Jungle Book.  Over the last few days, I read the last four.

“Tiger, Tiger” presented another adventure for Mowgli.  After being cast out of the wolf pack because of the tiger Shera Khan’s threat to take revenge on Mowgli and his adopted family, he goes to live with humans in the man village.  Using his skills and instincts he has learned from the wolves in addition to his responsibilities among the humans, Mowgli ingeniously traps and kills Shera Khan.  Mowgli casts the tiger’s hide onto the floor of the wolves’ meeting place in what I thought was an incredible image.  One gets the idea that Mowgli doesn’t completely fit in with the jungle or the humans and finds himself having to stand alone many times, but this lonesomeness gives him a strength and wisdom that he wouldn’t otherwise have obtained.

“The White Seal” doesn’t take place in the jungle but in the Bering Sea.  Kipling’s descriptions of the thousands of seals on the beach of an island brings to mind numerous National Geographic nature specials I watched as a kid.  This story involves Kotick, a white seal that saves much of his fellow animals from human destruction by scouting out the ocean for a safer place to reside.  He ends up being a sort of “Seal Messiah” – having a white coat adds to this effect.

“Toomai of the Elephants” could be called my favorite of these four stories.  Little Toomai is the fourth generation of elephant keepers for the British army in India.  He is eight years old and has a special relationship with Kala Nag (which means Black Snake), the oldest elephant in the army.  Little Toomai doesn’t want to wait until he grows up to work among the elephants, but the adult men tell him that he won’t be working with the elephants until he sees them dance.  This is similar to telling somebody they won’t do something until “pigs fly”.  But one dark night, Kala Nag uses his large trunk to lift Little Toomai onto his back and takes him deep into the dark jungle.  Toomai witnesses what the other men think is only a legend.  What made this story unusual from Kipling’s other stories in this collection is that the animals don’t talk or take on human characterisitics.  This gives the final scene with the elephants a powerful, almost sinister, feel.  It gives the sense that Toomai’s experience is truly special.

The final story is “Servants of the Queen”.  While it might not be my favorite of these stories, it was probably the most humorous.  The camels, horses, elephants and cows in the Queen’s army in India all chit-chat with each other about military life.  Some of them fight with each other some of them laugh with each other.  One of the funnier moments is when the cows indicate to the other animals that they don’t like working with the British as well as they do the Indians – the British eat them, the Indians don’t.

I highly recommend these stories and the other ones included in The Jungle Book.  I probably recommend Kipling’s short stories more than I recommend his novels.

I’ve seen several bloggers describe Neil Gaiman’s  2009 Newbery Medal-winning The Graveyard Book as “whimsical”.  I’ve heard this word now and again but have never been sure about what it means.  So I looked it up.  It means “quaintly humorous, odd”, the perfect description for this book.

In his afterword, Gaiman gives a nod to Rudyard Kipling’s The Jungle Book as some similarities between the two books exist, though differences put each book on its own pedestal.  A baby boy wanders into a graveyard after his family is brutally murdered.  The boy spends his childhood being raised by the ghostly inhabitants.  As the graveyard’s existence reaches back a thousand years, each ghost contributes something different in terms of history and human nature to the unusual education of the boy referred to as Nobody Owens, or Bod for short.

Bod’s guardian, Silas, provides him with the wisdom of someone who is neither dead or alive, who travels by night, who does not eat real food, and who has no reflection in mirrors.  The reader can make a good guess as to what sort of being Silas is, though, in an intelligent move, Gaiman never comes right out and says it.

Each of the eight chapters in the book tells a separate story, though they all come together at the end.  The mystery of Bod’s human family slowly unravels and he learns lessons about revenge and friendship from his dealings with his family’s enemies.  In spite of Bod’s adventures with monsters and scary beings, Gaiman maintains the subtlety and quiet that a whimsical story would provide, right down to its last whimsical line:

But between now and then, there was Life, and Bod walked into it with his eyes and his heart wide open.

The next story in Rudyard Kipling’s The Jungle Book is “Kaa’s Hunting”.  As I’ve mentioned previously, I have difficulty separating the stories from the Disney movie in my imagination.  I don’t know whether this should be considered good or bad, but either way, I’m not sure I can do anything about it!  So even before reading the story, I knew that Kaa was a snake. 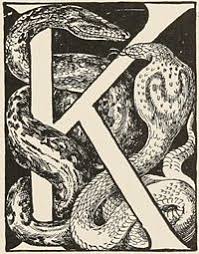 The movie doesn’t stray very far from the story, surprisingly.  This time, though warned by his friends Bagheera and Baloo, Mowgli fraternizes with the Monkey-People and gets captured by them.  The description of Mowgli’s capture and his subsequent “swing” through the upper echelons of the jungle (literally) made for a great section of the story and could very well be the next ride at Disney World.  As in the movie, the Monkey-People want Mowgli for his “man” abilities such as building huts.  They take him to a ruined city where they proceed to party into the wee hours of the night, something they tend to do every night – and day.  Their attention span doesn’t really lend itself to building huts.

Generations of monkeys had been scared into good behaviour by the stories their elders told them of Kaa, the night-thief, who could slip along the branches as quietly as moss grows, and steal away the strongest monkey that ever lived.

The Law of the Jungle allowed Bagheer and Baloo to join forces with Kaa and rescue Mowgli from the monkeys.  After Mowgli’s friends battle the monkeys and Kaa puts them in a trance with his “Dance of Hunger”, Kaa and Mowgli exchange pleasantries with Kaa telling the “manling” that he has “a brave heart and a courteous tongue”.  And while they part ways as friends of sorts, the reader gets the idea that Mowgli might be wise not to keep his back turned on Kaa for very long.

What I find interesting about these stories is the relationships between the various creatures of the jungle.  The alliances and enmities do not always keep with those of the natural world.  They also can change on a moment’s notice- possibly, more like humanity than the animal kingdom. 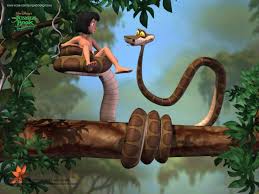 I read Rudyard Kipling’s short story “Mowgli’s Brothers” last night – it’s a part of Kipling’s The Jungle Book.  I confess that in reading this story I can’t help but picture the Disney animated movie that I’ve grown up with.  The real story is a little less tame than Disney’s, but I think Walt Disney and his associates must have at least read the Kipling stories to create the characters in the movie.  One note of interest (at least to me) is that Disney’s movie version was the last movie that Walt Disney worked on, himself.

The story is the opposite of the novel I just read, Jack London’s White Fang.  In that novel, a wolf goes to live with “man”.  In this story, Mowgli, a child, goes to live in the jungle with wolves.  Bagheera, the panther, while ferocious to the rest of the jungle displays a firm gentleness in protecting and befriending Mowgli.  Baloo, the bear, teaches Mowgli all about how to find food – without a lot of effort.

When the wolves are at their council to determine whether Mowgli should stay, Bagheera offers a dead bull to the pack.  Because the council needs two members to speak up for Mowgli (other than his wolf parents), Baloo offers his affirmation of Mowgli.  Therefore, Mowgli is allowed to stay with the pack “for the price of a bull and on Baloo’s good word.”

As Akela, the wolf leader, grows old, the question comes up again as to whether Mowgli can stay.  Sheera Khan, the tiger that originally chased Mowgli into the jungle as a child, continues to hold a grudge against him.  As he has planted seeds of doubt into the minds of many of Mowgli’s “brothers”, they try to hand him over to the tiger.  Mowgli uses “Red Flower” (fire) that he’s stolen from the man-village to ward off his attackers on the council and then decides it is his time to return to his village, though it’s not without much grief and tears.

The animals in Kipling’s stories are more anthropomorphic ( I like using that word) than in London’s novels.  While there is still talk of the “Law of the Jungle”, it’s a law that is made up by Kipling himself for his stories; whereas, London’s “law” seems to be based more on nature in “real life”. 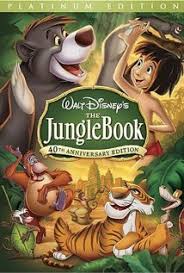