[There] they go, big as life an’ brassy as tacks.

I think “Spunk” is my favorite Zora story so far. Spunk Banks struts about town, big and bold, with Joe Kanty’s wife. Spunk doesn’t have a guilty bone in his body and everyone in town knows how big and bold he is. Joe Kanty on the other hand is angry but timidly tries to ignore what’s going on. When push comes to shove, mostly by talk of the other residents of their small Florida town, Joe attempts a confrontation.

I don’t want to ruin for future readers how things get resolved but it’s not how one might think. There are also some nice supernatural elements that bring the story to a different level. Whenever someone asks about good ghost stories, I need to remember Zora Neale Hurston’s “Spunk”.

This is included in her collection Hitting a Straight Lick With a Crooked Stick. I read it when I selected the Five of Hearts for Week 24 of my Deal Me In 2021 short story project. Check out my Deal Me In list here. Deal Me In is hosted by Jay at Bibliophilopolis.

Stella was thrilled to the heart by this passionate appeal. She loved Sam surely, and she wanted to be his wife, but she couldn’t find a word of acceptance that didn’t sound bold and brazen to her. But every woman, whether she be college-bred and city reared, the daughter of wealth and fashion; or just a country girl like Stella has felt that same lack of words under the same circumstance. After a while Stella nodded her head in the affirmative. Sam grabbed her hand and pressed his suit.

Zora Neale Hurston’s short story “The Conversion of Sam” is another story about marriage that is mostly sweet but shows some typical marital bumps along the road not unlike her story “The Gilded Six-Bits”. The marriage in this story, as cute as it might be, has underlying problems as a result of racial issues, gender issues and class issues.

The beauty of the story is that these issues aren’t so overt that it becomes something political. It’s able to remain simply a great story that quietly, but strongly, makes points about the world we live in – both in today’s world and Hurston’s world.

This is included in her collection Hitting a Straight Lick With a Crooked Stick. I read it when I selected the Six of Hearts for Week 16 of my Deal Me In 2021 short story project. Check out my Deal Me In list here. Deal Me In is hosted by Jay at Bibliophilopolis.

But these twigs, which John called ships, did not always sail away. Sometimes they would be swept in among the weeds growing in the shallow water, and be held there. One day his father came upon him scolding the weeds for stopping his sea-going vessels.

“John Redding Goes to Sea” is another great story by Zora Neale Hurston. It’s written in a fable-type format where John, as a boy, has dreams and desires to sail off into the horizon that he can sea from his Florida coast home. As with many dreams and desires, they don’t go away as John gets older.

In many stories with this type of theme, the father is the one that tries to squash the dreams for what he considers good reasons. In the case of this story, though, John’s father has the sympathy for his son that John’s mother and later John’s wife can’t seem to muster.

How John is torn between the women in his life and what he truly wants to do comes off as an extremely palpable conflict. It’s John’s father who gives him his bittersweet farewell.

I’m looking forward more and more to each new Zora story that pops up from my Deal Me In 2021 list. This is included in her collection Hitting a Straight Lick With a Crooked Stick. I read it when I selected the Seven of Hearts for Week 9. Check out my Deal Me In list here. Deal Me In is hosted by Jay at Bibliophilopolis.

Joe smiled indulgently and let his wife go through all of his pockets and take out the things that he had hidden there for her to find. She bore off the chewing gum, the cake of sweet soap, the pocket handkerchief as if she had wrested them from him, as if they had not been bought for the sake of this friendly battle.

In “The Gilded Six-Bits”, Zora Neale Hurston uses a fake gold coin to contrast a very real (not necessarily perfect) marriage. Joe and Missie May have fun, enjoy each other and have one of the better fictional marriages that I’ve read in a while. The title object plays a role in what could bring down their marriage but ultimately Missie May realizes the gold is fake and her marriage is real.

At the end of the story, an off-the-cuff comment made by a white owner of a store frequented by Joe adds to the contrast. Unfortunately, fake ideas make racism real but at least in this story Joe and Missie May’s love seem to have the upper hand.

This story is included in the collection Hitting a Straight Lick With A Crooked Stick. I read it when I selected the Ace of Diamonds for Week 3 of my Deal Me In 2021 short story project. Check out my Deal Me In list here. Deal Me In is hosted by Jay at Bibliophilopolis.

Zora Neale Hurston’s novel Their Eyes Were Watching God has been on my radar for a long time. In spite of it being on numerous “best” lists and outside of it having an African American female protagonist, I admit I didn’t know much about it. I didn’t know about it’s history, it being banned and even out of publication before being published again in 1978 (per Amazon.com). 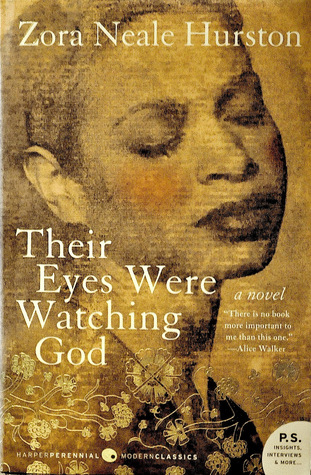 As I read it, I slowly realized that Hurston’s elegant narration combined with the  “dialect” of the characters’ conversations provided a beautiful friction to the entire story. At the beginning, the difference seems jarring; however, by the end, both styles morph into each other and provide a masterful way in which to tell the story of Janie Crawford.

In a nutshell, Janie works her way through three husbands to find the power she has within herself. All kinds of interesting characters weave themselves in and out of the story and tell stories themselves. While reading the novel, it was easy to think there was no definitive structure to the narrative. But when all was said and done, it took me by surprise that the novel was more or less a five act play. Acts 1 and 5 stood as bookends of Janie returning to Eatonville, Florida after marrying her third husband. Acts 2, 3 and 4 each centered around Janie’s husbands.

The theme of racism is buried in the story though the theme of sexism is much more prevelant. I love the way Hurston simply tells Janie’s story with real people and real situations and lets the effects of these evils play out without preaching or teaching.

In the form of a hurricane, Hurston makes the specific universal. The fact that this “act of God” wreaks havoc on everybody, male or female, black or white – nobody is special, nobody is better – pulls any reader into the human condition:

It is so easy to be hopeful in the day time when you can see the things you wish on. But it was night, it stayed night. Night was striding across nothingness with the whole round world in his hands.