In picking the Queen of Clubs for Week 7 of my Deal Me In 2015 Short Story Project, I’ve finally introduced myself to Sherwood Anderson and his stories surrounding Winesburg, Ohio.  “The Strength of God” goes straight to the heart, mind and soul of Winesburg’s Presbyterian minister, The Reverend Curtis Hartman.

Based on this one story, I would say Anderson’s writing style is simple and straightforward. The story itself appears to be part of a larger tale about the Ohio town.  Both Anderson’s style and story remind me of Ernest Hemingway’s Nick Adams stories. Other things are going on outside of this story, perhaps in other stories; however, that doesn’t keep “The Strength of God” from standing on its own. 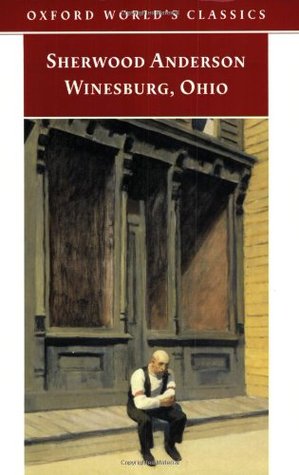 Through a broken window in his belltower study, the married Reverend Hartman discovers that he can look into the bedroom window of a neighboring house and view a woman lying on her bed.  Nothing happens beyond looking, but the temptation to look induces guilt and torment that almost drives him mad.  I think the reason behind this guilt can be found in what I consider one of the more tragic passages I’ve read in a while:

Resolutely the minister put the thoughts of the woman in the bed out of his mind and began to be something like a lover in the presence of his wife.

Anderson doesn’t portray his minister as less than a lover but he’s not an actual lover.  He is “something like a lover”. What’s actually driving Reverend Hartman mad?  The temptation, the guilt, even sin?  Or is it a marriage of passionless mediocrity?  At least in this story, the reader doesn’t get the wife’s perspective.  What seems like a harmless act perhaps covers major issues with the minister’s character and marriage.  One can also guess that most of the inward turmoil within Reverend Hartman isn’t known to the outside world of Winesburg, Ohio – a town I wouldn’t mind visiting again.

Ernest Hemingway’s short story “Now I Lay Me” is another Nick Adams story.  This one is set during the war.  During the night, Nick attempts to keep himself awake for fear the dark will take his soul.  I read this story for Week 41 of my Deal Me In 2014 project.  My Deal Me In 2014 list can be seen here.  DMI is sponsored by Jay at Bibliophilopolis. 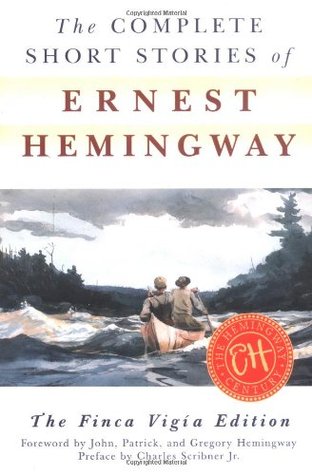 Through the night, Nick wanders in his mind from subject to subject.  First, he thinks about fishing trips, both real and imagined.  Next, he determines to pray for everyone he knows.   He remembers his grandfather’s attic and what seems to be a disagreement between his parents in regard to the attic’s contents.  As he realizes his roommate is awake, he talks to him for a while until his friend dozes off.  His friend gives him the idea of thinking about all of the girls he has known and what kind of wives they would make, along with the advice that Nick needs to find a wife.

From all of these mind travels, I get the distinct impression that Nick wasn’t just trying to find reasons to stay awake but trying to find a purpose to life.  I think it’s telling that he revisits one of these topics.  It’s not prayer, family or marriage.

When I think about humorous writers, I don’t think of Hemingway.  It’s hard for me to imagine him cracking up the audience down at “The Funny Bone”.  But while reading this story,  I couldn’t help but think of Brad Paisley’s funny little tune I’m Gonna Miss Her (The Fishin’ Song).

What do ten Native Americans do on the Fourth of July?  In Ernest Hemingway’s short story “Ten Indians”, they get drunk and pass out on the side of the road just as Nick Adams (a recurring Hemingway character) and his friends drive by.  Hemingway has never been known for political correctness; however, the Americana backdrop of this story makes me think this is more than an offensive stereotype.  The Independence Day setting together with Adams returning to his father after a baseball game via a horse-drawn wagon sets up things for a quaint little story – except for the drunk Indians.  Is Hemingway saying, for various reasons, not everyone celebrates in the same manner? 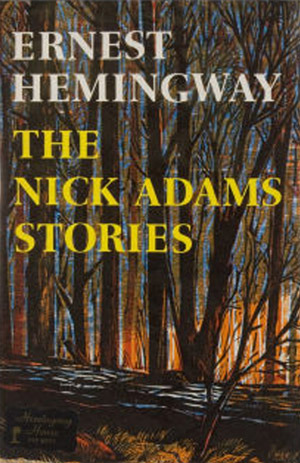 Nick’s friends carelessly drive by the men on the road as they drop off Nick at his father’s.  Nick’s father then proceeds to carelessly let him know that he saw Prudence Mitchell in the woods with another boy.  Nick’s infatuation with Prudence (an Indian girl) crosses over into other stories.  Hemingway leaves it up to the reader to determine whether Mr. Adams is purposely trying to hurt his son or doesn’t actually realize Nick’s feelings for Prudence.  Other Nick Adams stories give one the impression that Nick and his father have a love/hate relationship.

I like the coincidence of choosing this story for this particular week.  As I was reading it, I felt as though Hemingway is giving Mark Twain a little nod.  And then Nick is offered a piece of pie by his dad  – “huckleberry pie”.  I did a double take.  Another coincidence?

And finally, the bittersweet ending:

My Deal Me In 2014 list can be seen here.  DMI is sponsored by Jay at Bibliophilopolis 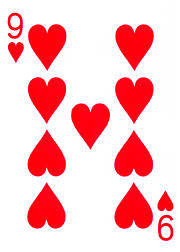 J. D. Salinger’s short story “Pretty Mouth and Green My Eyes” gave me a film noir impression and many questions.

A “girl” is in bed with a “gray-haired man” when the phone rings.  The man (named Lee) answers it to discover that it’s his acquaintance or perhaps colleague, Arthur.  Slightly drunk, Arthur expresses his concern to Lee that his wife or girlfriend, Joanie, has run off.  First question that pops into my head is:  I wonder whether Joanie is the girl in bed with Lee?  Arthur, apparently an attorney, rambles on about Joanie and their relationship while Lee questions him about a case he had that day.  Arthur lost the case due to a chamber maid, some sheets and bed bugs (?).  According to Arthur, their boss, Junior (Junior?) won’t be happy.  Another impression comes to me at this point.  I don’t think Junior is really the head partner of a law firm(?).   While the phone conversation is taking place, the girl is playing around with cigarettes and the bed sheets (sheets, again?).  Lee hangs up and the girl seems a little surprised that it was Arthur (maybe worried that it was Arthur?).  Arthur calls right back to tell Lee that Joanie came home and went right to the bathroom (in other words, he hadn’t actually seen her come in).  Now it’s time for Lee to be surprised.  Is the person in the bathroom really Joanie?

The title of the story comes from a poem Arthur wrote to Joanie when they first met.  The poem jumbled up the words to a “Roses are red” kind of verse.  I’m not sure what this really says about Arthur or about Joanie?

In some ways, the story reminded me of a few of Hemingway’s Nick Adams stories.  I get another impression that other stories might exist that fill in some of the blanks.  Whether those stories are actually published or were simply in Salinger’s head, I don’t know – another question?

Anybody with some insight into this Salinger story feel free to chime in.  I would love to be enlightened!

Any story that makes me wonder about so many things can’t be all bad, but I don’t think this one rises to the level of the other three of Salinger’s stories that I’ve read:

For Esme – With Love And Squalor

“The Killers” could also be called “The Further Adventures of Nick Adams”.  As with Ernest Hemingway’s other Nick Adams stories, the reader gets the idea there is more to the story than just what happens in this one.  Since Hemingway wrote a number of stories revolving around Nick Adams, they would be right.  At least by me, it’s been difficult to put any of the stories together.  Perhaps that wasn’t the intention.

This story has Nick sitting at a lunch-counter when two apparent thugs walk in and sit down.  Problems ensue as the thugs, who I imagine looking like Joe Pesci (particularly the Joe Pesci in Good Fellas), make known their plan to kill one of the regular customers.  When this regular customer does not show up, they move on.

Nick takes a walk over to the apartment of this regular customer, Ole Andreson.  A former boxer, Andreson’s life seems to have taken a turn for the worse.  The reader never gets to know the details of what “went down” between Anderson and the thugs.  Hemingway focuses on Andreson’s loss of dignity rather than what he specifically did to warrant the thugs to want to kill him.

My summer before 10th grade,  I received a reading list for my AP English class.  On the list was a disclaimer of sorts that indicated that, while the books on the list were considered some of the greatest works in American literature by Pulitzer and Nobel winning authors, they could contain material that was offensive so we were encouraged to use discretion in picking what we read.

As a result of this list, I discovered Ernest Hemingway.  Just as his writing style revolutionized the literary world of his day, it revolutionized my reading world during that summer.

While I don’t believe Hemingway’s short story “Fathers and Sons” was on that list, if it was, it would probably be one of the works that necessitated the disclaimer.  The story involves Nick Adams, a recurring character in several of Hemingway’s stories, on a drive in the country with his son (whom we know is younger that twelve).  While he’s driving, Nick begins to reminisce about his own father who has since died.  He recalls his father’s physical features, especially his eyes.  He also recalls three things in which his father influenced him:  fishing, hunting, and “women”.  Nick thinks back fondly and gratefully for his father’s positive influence and guidance in two of these areas – the other one, not so much.  I’ll let you figure out which is which.

I would not say that Hemingway hits on a universal theme between fathers and sons, because not all fathers are like Nick’s father.  I will venture to say that he hits on common themes among many fathers and sons.

I’m still not sure whether the Nick Adams stories are in any kind of chronological order.  In each of the stories I’ve read, the reader gets hints of things that have happened outside the story, but no specific details – as though that’s left to another story.