To man has been given the grief, often, of seeing his gods overthrown and his altars crumbling; but to the wolf and the wild dog that have come in to crouch at man’s feet this grief has never come.  Unlike man, whose gods are of the unseen and the overguessed, vapours and mists of fancy eluding the garmenture of reality, wandering wraiths of desired goodness and power, intangible out-croppings of self into the realm of spirit – unlike man, the wolf and the wild dog that have come in to the fire find their gods in the living flesh, solid to the touch, occupying earth-space and requiring time for the accomplishment of their ends and their existence.  No effort of faith is necessary to believe in such a god; no effort of will can possibly induce disbelief in such a god.  There is no getting away from it.  There it stands, on its two hind-legs, club in hand, immensely potential, passionate and wrathful and loving, god and mystery and power all wrapped up and around by flesh that bleeds when it is torn and that is good to eat like any flesh. 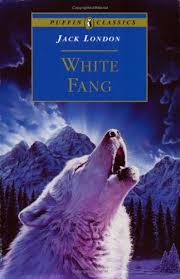 Something about Jack London’s novels, particularly White Fang and Call of the Wild, make me think of nature movies I used to watch as a kid.  The animals were not anthropomorphic – it was simply live animals on film with a narrator (like Morgan Freeman) telling the story.  Even though I would typically think of these films as less than entertaining,  the beauty of the scenery and the animals, along with the story-telling, pulled me into the movies in spite of myself.

While an aspect of London’s novels have some similarities to these movies, he always takes me by surprise with his insights and writing as in the paragraph I quoted above from White Fang, which I just finished reading.  White Fang’s references to man as “gods”, both in wrath and in love, gives a unique perspective to the relationship between man and animals and an insight into London’s view of the world.  I continue to get the impression that London sees a difference between humanity and the animal kingdom; however, he wishes there was not a difference.  He sees animals as having a straight-forward, less complex life that I think he finds appealing.  Sometimes I find it more appealing, too.

One thought on ““…god and mystery and power all wrapped up…””