My summer before 10th grade,  I received a reading list for my AP English class.  On the list was a disclaimer of sorts that indicated that, while the books on the list were considered some of the greatest works in American literature by Pulitzer and Nobel winning authors, they could contain material that was offensive so we were encouraged to use discretion in picking what we read.

As a result of this list, I discovered Ernest Hemingway.  Just as his writing style revolutionized the literary world of his day, it revolutionized my reading world during that summer. 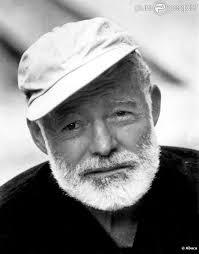 While I don’t believe Hemingway’s short story “Fathers and Sons” was on that list, if it was, it would probably be one of the works that necessitated the disclaimer.  The story involves Nick Adams, a recurring character in several of Hemingway’s stories, on a drive in the country with his son (whom we know is younger that twelve).  While he’s driving, Nick begins to reminisce about his own father who has since died.  He recalls his father’s physical features, especially his eyes.  He also recalls three things in which his father influenced him:  fishing, hunting, and “women”.  Nick thinks back fondly and gratefully for his father’s positive influence and guidance in two of these areas – the other one, not so much.  I’ll let you figure out which is which.

I would not say that Hemingway hits on a universal theme between fathers and sons, because not all fathers are like Nick’s father.  I will venture to say that he hits on common themes among many fathers and sons.

I’m still not sure whether the Nick Adams stories are in any kind of chronological order.  In each of the stories I’ve read, the reader gets hints of things that have happened outside the story, but no specific details – as though that’s left to another story.