Drawing the Jack of Hearts this week gave me another story from J. D. Salinger’s Nine Stories.  When I began reading “The Laughing Man”, I realized that I had read it before.  I’ve had this collection for a long time, so I’m wondering if I will remember other ones.

The narrator, who isn’t named, tells this story as a flashback to 1928 when he was nine.  As a member of a scouting organization called the Comanches, on weekends, he hops on a bus with his Chief and the other Comanches to go to a park to play baseball or football or some other sporting activity.  The Chief is John Gedsudski, a mild mannered young adult whom the boys idolize. 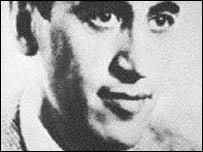 Salinger easily combines the innocent expectations of nine year-old boys with the sadness that can come with growing up.  One day the Chief brings a girl, Mary Hudson, along with him when the boys play baseball.  Much to the dismay of the boys, she politely insists on playing.  Much to their surprise, they discover she can hit the ball – really well.  The nine year-old narrator describes her in one of my favorite lines:

Her stickwork aside, she happened to be a girl who knew how to wave to somebody from third base.

During the bus rides, the Chief tells the boys stories he makes up about an action hero called The Laughing Man – a name given to the character due to a facial deformity.  The boys sit on the edge of their seats while The Laughing Man gets out of life-threatening situations while fighting various arch-enemies.

The fact that Salinger uses baseball in this story makes it another favorite of mine.  He uses the game, the boys, the Chief, The Laughing Man and Mary Hudson to drive home (pun intended) the point that all good things come to an end.

6 thoughts on ““The Laughing Man” by J.D. Salinger”