I drew the Seven of Clubs for Week 9 of my 2015 Deal Me In Short Story project and that corresponded to Ernest Hemingway’s “God Rest You Merry, Gentlemen”.  I put this story on my list for two reasons: 1) Hemingway has always been a favorite and 2) I’ve gotten into the habit of putting a Christmas title on my list just for the fun of seeing when it shows up during the year. My Deal Me In 2015 list can be seen here.  Deal Me In 2015 is sponsored by Jay at Bibliophilopolis. 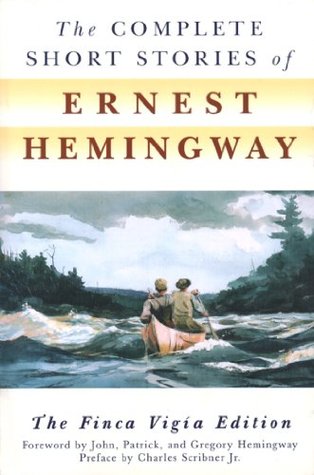 In those days the distances were all very different, the dirt blew off the hills that now have been cut down, and Kansas City was very like Constantinople.

The line brings to mind a vague universalism that quickly and seamlessly spirals into Hemingway at his most horrifically raw. On Christmas Day evening, the narrator wanders from a saloon to the emergency room of the local hospital.  A teenage boy has mutilated himself trying to get rid of the “lust” that he considers sinful.  The reader learns of the event from its retelling to the narrator by two doctors.

On the surface, this could simply be a “this is why religion is bad” story; however, as the doctors, one of whom is Jewish, debate the significance of Christmas Day and whether it’s “our Savior” or “your Savior”, the story becomes more than anti-religion.  In retelling the story, one of the doctors brilliantly but unpersuasively states the obvious to the teenager:

If you are religious remember that what you complain of is no sinful state but the means of consummating a sacrament.

While my amateur research tells me that the religious beliefs of Hemingway and Flannery O’Connor were likely very different, it seems they have crossed paths with at least this story.  Both authors focus on the dark side of humanity and its botched attempts to make things right.