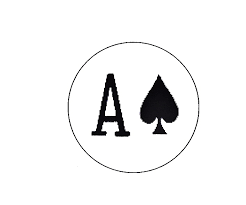 Amid the seeming confusion of our mysterious world, individuals are so nicely adjusted to a system, and systems to one another, and to a whole, that, by stepping aside for a moment, a man exposes himself to a fearful risk of losing his place forever.  Like Wakefield, he may become, as it were, the Outcast of the Universe.

In picking the Ace of Spades this week, I found myself reading the wonderful and puzzling story “Wakefield” by Nathaniel Hawthorne.  Mr. Wakefield leaves his wife for twenty years on a seeming whim.  Does he traipse  around the world or have a torrid affair?  No, unbeknownst to his wife, he moves one street over from his (and his wife’s) house – for twenty years.  After missing for a while, his wife and everyone else in the community assumes he is dead.  Again, after twenty years, he appears at his doorstep and resumes his marriage.  I don’t feel like I’m spoiling anything in explaining this aspect of the story because all of this is explained by Hawthorne in the first paragraph.

I found puzzling (but also one of my favorite parts) the description of Wakefield walking out the door and taking a quick look back at his wife with an expression that could be considered mischievous.  The reader gets the impression that Wakefield does not fully know or have set intentions of being gone for twenty years – but simply feels like leaving.   Hawthorne gives no suggestion that marital problems exist between Mr. and Mrs. Wakefield. Isolation in the midst of community, a small step off the beaten path becoming nonconformity – both these ideas get tossed around by Hawthorne.  Wakefield becomes an “Outcast of the Universe” by moving a block away from his home.   I don’t get a strong sense of whether the author thought Wakefield completely right or completely wrong in his  unusual decision.  Just as unusual, Hawthorne gives no description of Mrs. Wakefield’s reaction on what would have had to have been a surprise when her husband turns up after such a long absence.  It’s hard to imagine no questions being asked.