The final short story from my 2013 Deal Me In project is F. Scott Fitzgerald’s “The Lees of Happiness”.  In somewhat of a departure from the other Fitzgerald stories I’ve read this year in Tales of the Jazz Age, this one has real people with real problems.  Even if it contains a little melodrama and sentimentality, I enjoyed it for the fact that the characters show a depth of humanity and responsibility that doesn’t frequently appear in Fitzgerald’s 1920’s “lost generation”. 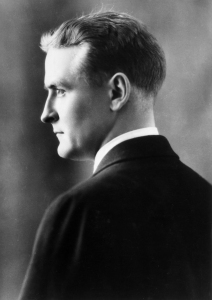 Jeffrey Curtain, a budding writer, marries Roxanne, an actress.  They move to a Chicago suburb  with the proverbial house with a picket fence.  They move in social circles that are typical of Fitzgerald’s characters; however, tragedy strikes when Jeffrey suffers a blood clot in the brain and becomes essentially “brain-dead”.  Most of the story revolves around Roxanne’s sacrificial giving of her life to taking care of Jeffrey.  There are those that criticize her for continuing to maintain her marriage – those that tell her that Jeffrey wouldn’t want her to “waste” her life this way.  I would not say that Fitzgerald is attempting to take a stance on the “right to die” issue, by any means (nor am I attempting to do that with this post).  I think he just wanted to show one human being committed to another for better or worse, in sickness and in health.

While I still consider The Great Gatsby one of my favorite books, I am well aware of the shallowness and decadence portrayed in that novel.  I think Fitzgerald, himself, was aware of the situation and that’s why he wrote the novel.  But I’m glad he wrote a story like “The Lees of Happiness”, also, showing humanity with something more.

10 thoughts on “The Lees of Happiness by F. Scott Fitzgerald”