There once was a priest with cold, watery eyes, who, in the still of the night, wept cold tears.

The above quotation, one of the best first lines I’ve read in a while, begins F. Scott Fitzgerald’s short story “Absolution”. Of the Fitzgerald short stories I’ve read, this one ranks as my favorite and I’m pretty sure it will make it into my Top 10 at the end of this year.

The priest’s perspective frames the story at the beginning and the end. In between, we get the perspective of eleven year-old Rudolph Miller and his father. Rudolph’s father, a devout Catholic, often loses his temper much to the detriment of Rudolph’s physical safety and his fragile psyche.

Much of the story involves Rudolph’s guilt as he lies to his father and to the priest at confession and then takes communion without confessing his “sins”. Fitzgerald’s elegant narration brilliantly captures the snowball effect of Rudolph’s inability to cover up each misdeed with another one culminating in the fear of being poisoned as the priest places the bread on his tongue.

As Rudolph heads for what seems like a breakdown, he finally tells the priest everything – not necessarily in the traditional confessional situation but in simply a one-on-one meeting. While the reader gets a hint at what the priest might be thinking at the beginning of the story, it comes as a surprise, albeit a very legitimate one, that the priest now has a breakdown and instead of giving Rudolph penance or punishment, he tells him to go to an amusement park:

“Well, go to an amusement park.” The priest waved his hand vaguely. “It’s a thing like a fair, only much more glittering. Go to one at night and stand a little way off from it in a dark place – under dark trees. You’ll see a big wheel made of lights turning in the air, and a long slide shooting boats down into the water. A band playing somewhere, and a smell of peanuts – and everything will twinkle. But it won’t remind you of anything, you see. It will all just hang out there in the night like a colored balloon – like a big, yellow lantern on a pole.”

According to Maureen Corrigan in her book So We Read On, this story has been considered a precursor to The Great Gatsby. Some minor details might point to this such as a brief mention that Rudolph is not from a wealthy family and Rudolph’s imagining himself as another person with another name – perhaps the way James Gatz became Jay Gatsby; however, if I had not been aware of this prior to reading the story, I don’t think I would have found much of a connection. The story stands on its own.

But then maybe the priest became the Gatsby character?

I read this story when I selected the Two of Spades (my second wild card in a row) for Week 27 of my Deal Me In 2017 short story project. It’s included in my copy of The Short Stories of F. Scott Fitzgerald. My Deal Me In list can be found here. Deal Me In is hosted by Jay at Bibliophilopolis.

F. Scott Fitzgerald’s short story “An Alcoholic Case” rates as a departure in his writing style. Fitzgerald’s typical ornate wording gives way to a more stripped down, cut-to-the-chase manner of writing.  I make no definitive conclusion; however, after the informative biographies I’ve read about Fitzgerald (So We Read On by Maureen Carrigan) and Ernest Hemingway (Hemingway’s Boat by Paul Hendrickson), I’m curious if this story was in some way an attempt by Fitzgerald to write like his Lost Generation cohort with whom he did not always have the greatest relationship.

A home health nurse is assigned to the case of an alcoholic and he tends to live up to the reputation alcoholics have among the nurses.  Broken glass becomes some sort of symbol whether it’s a broken bottle of gin on the bathroom floor or the broken windows in the bus the nurse takes home each evening.  Life’s brokenness and sharpness come to mind as I read the quick story – another exception to the typical Fitzgerald style.  This is probably the shortest story of his that I’ve read.

I also couldn’t help but wonder about the significance of this story to Fitzgerald’s own relationship to alcohol.  In both the previously mentioned biographies, Fitzgerald’s drinking binges were widely known and could have resulted in at least a few lost relationships in addition to contributing to his early death at the age of 44 (this story was published in 1937, three years prior to his death).

In Hemingway’s Boat, Paul Hendrickson quotes one of Hemingway’s letters in which he laments his public’s expectations of writing longer novels as opposed to novels like The Old Man and The Sea.  At least ten years after Fitzgerald’s death, Hemingway wonders if this had any impact on Fitzgerald’s downturn as a popular author as The Great Gatsby was a short novel, also.  With a typical mean stroke (even after Fitzgerald was dead), Hemingway says:

“…I will bet it did more to wreck poor old Scott than anything except Zelda, himself and booze.”

Because I prefer Fitzgerald to be Fitzgerald and Hemingway to be Hemingway, “An Alcoholic Case” may not be my favorite of Fitzgerald’s stories, but it was worth reading. Also, if one is looking for the light, fun and sentimental Fitzgerald, try his earlier stories – this one does not fit that mold:

She knew death – she had heard it, smelt its unmistakable odor, but she had never seen it before it entered into anyone, and she knew this man saw it in the corner of his bathroom: that it was standing there looking at him while he spit from a feeble cough and rubbed the result into the braid of his trousers.  It shone there…crackling for a moment as evidence of the last gesture he ever made.

I had several of Cather’s stories on my Deal Me In 2013 list.  While I enjoyed some of them, others left me a little flat.  Her stories that are set in Nebraska or the Southwest were beautiful and intriguing to me.  In spite of my infatuation with New York City, her stories involving artists in the Big Apple at the turn of the twentieth century just didn’t grab hold of me.

In the case of “Paul’s Case”, though, Cather does something different with New York City.  Paul, a teenager, lives in Pittsburgh and is somewhat of a delinquent at school.  He loves serving as an usher at Carnegie Hall so that he can rub elbows with the rich and famous – both the patrons and the performers.  His awe of the rich lifestyle contrasts with his contempt for his lower income neighborhood and school.

Cather simultaneously casts a small spark of sympathy for Paul’s situation (or “case” as the title suggests) and a repulsion for Paul’s attitude and character.  By less than noble means, Paul manages to run away to New York City and live the high life – for a little while.  As with many teenagers, Paul doesn’t realize that there is such a thing as a future and that his means will eventually run out:

It was characteristic that remorse did not occur to him.  His golden days went by without a shadow, and he made each as perfect as he could.

Since I’m on an F. Scott Fitzgerald kick, I’ll bring up the fact that Maureen Corrigan, in So We Read On, indicates that Fitzgerald “adored” Willa Cather.  Corrigan even goes on to say that some of the characters in The Great Gatsby were inspired by characters in Cather’s stories (Corrigan bases this on letters Fitzgerald wrote to Cather).  Paul in “Paul’s Case” has some definite Jay Gatsby attributes; however, I would guess that Gatsby ultimately gets more reader sympathy than Paul does. 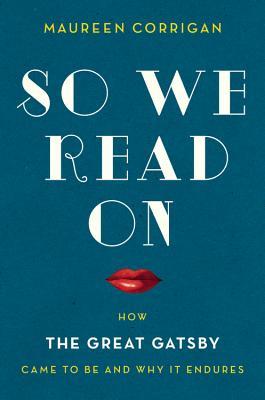 I’ve never seen other people at the grave, but always there are tributes: flowers, coins, and miniature liquor bottles.  This book, too, is a kind of tribute, though Fitzgerald, surely, would rather have had the booze.

Maureen Corrigan’s book So We Read On: How The Great Gatsby Came To Be and Why It Endures is truly a wonderful tribute.  Those who love F. Scott Fitzgerald’s The Great Gatsby can’t help but get caught up in her passion for the book; however, even those who might not be a fan of Gatsby but are still avid readers will appreciate Corrigan’s love of literature and excitement over the continuous discovery that reading brings – and “discovery” is perhaps the best word to describe this book that is part literary analysis, part history and biography, and part memoir.

The reader experiences Corrigan’s trip to the deep, dark basement of the Library of Congress to spend a few days leafing through original Fitzgerald letters and drafts and it’s as adventurous as a treasure hunt.  The nostalgia is easy to feel as she makes a trip back to her Catholic High School in Queens to see what students think of Gatsby, now.  She makes a great case for Gatsby’s initial boost in popularity (it was a flop when it was first published) arising from the Armed Services Edition paperback versions distributed to the troops during World War II.

While her portrayal of Scott and Zelda Fitzgerald is sympathetic, Corrigan doesn’t sugarcoat their lives nor bypass their faults and hardships.  She mentions a group of staunch Zelda supporters who blame Scott for Zelda’s tragic life; however, Corrigan doesn’t seem to fall into that category, herself.  I found it interesting that, while she might have respect for Ernest Hemingway as a writer, she doesn’t respect him as a person.  Her research reveals Hemingway’s continuous condescension toward Fitzgerald later in their relationship.  By Corrigan’s standards, Fitzgerald was much better friends with Ring Lardner.

Maureen Corrigan is the book critic for NPR’s Fresh Air and she also has been instrumental, along with the National Endowment for the Arts and local public libraries, in establishing the “One Book, One City” programs throughout the United States.

If I could think of a dream job, it would probably be doing research for a book like this.