Of his short stories I’ve read so far, Wendell Berry’s “Watch With Me” is my favorite. It’s included in Berry’s collection That Distant Land. It’s set in 1916 after Thacker “Nightlife” Hample is told he can’t preach at the annual revival. Hample’s nickname “Nightlife” comes from his inability to see very well. Many of the people in town have said that he’s liable to conduct his nightlife during the day. Make of that what you will. Unfortunately, Nightlife also isn’t always in his right mind or again, as the townspeople say, his mind is “out of fix”. 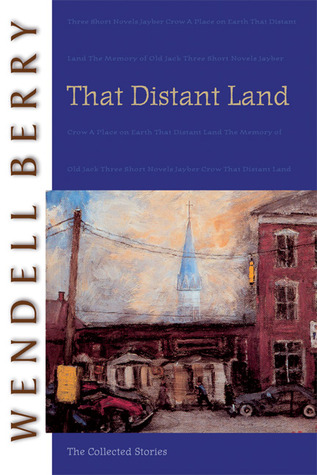 He’s not a preacher and he comes from a family that is on the fringe of Port William’s society. It’s humorous how Berry describes the preachers that turn down Nightlife’s request:

It would have been better if the two preachers had just said all right. But they, who well knew that they knew neither the day nor the hour of the coming of the Son of Man, were in fact not prepared for anything unscheduled.

Berry tends to not paint preachers and organized religion in general in the greatest of light.

As a result of his rejection, the next day, Nightlife shows up at Tol Proudfoot’s shop and takes Tol’s loaded shotgun and walks away. Concerned for Nightlife’s own safety and the safety of anyone Nightlife might encounter, Tol and a few other men from the community set out to keep an eye on Nightlife as he wanders the hills in and around his town.

These neighbors then proceed to follow Nightlife for the next day and a half or 40 pages (this isn’t a short short story). The tension builds as to how this journey might eventually end. As the traveling continues (and it’s mostly in circles), the reader realizes that these men, in their own way, consider Nightlife a part of their community even if he does live in the margins of it. They continue to watch him because deep down they care about him as much as they care about everyone else in their town.

Nightlife ultimately does wander back to Tol’s shop. The men following him are able to get the shotgun away from him.

And Nightlife preaches his sermon.

A sermon taken from Jesus’ parable about the shepherd who leaves his 99 sheep to find the lost one. Only Nightlife touchingly tells the story from the perspective of the lost sheep instead of the shepherd:

“Oh, it’s a dark place, my brethren,” Nightlife said. “It’s a dark place where the lost sheep tries to find his way, and can’t. The slopes is steep and the footing hard. The ground is rough and stumbly and dark, and overgrowed with bushes and briars, a hilly and a hollery place. And the shepherd comes a-looking and a-calling to his lost sheep, and the sheep knows the shepherd’s voice and he wants to go to it, but he can’t find the path, and he can’t make it.”

The men listen and probably get more out of Nightlife’s sermon than the sermons at the revival (that’s just a guess on my part). It’s something they don’t easily forget:

Long afterward, Elton Penn asked Walter Cotman, “Did what he said make sense? I mean, did you feel for him?”

“Me?” Walter said. “Course I felt for him! The son of bitch could preach!”

4 thoughts on “Wendell Berry: Watch With Me”