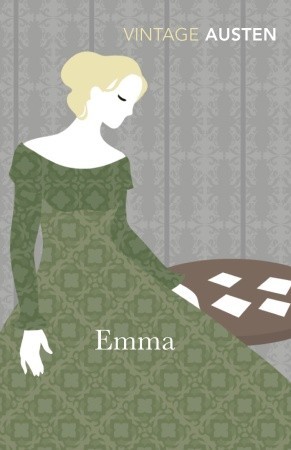 …and it really was too much to hope even of Harriet, that she could be in love with more than three men in one year.

I probably consider Emma my second favorite Jane Austen novel next to Pride and Prejudice but I have to read Northanger Abbey to make a definitive statement and that novel is on my list to read this month.

With Emma, I got that familiar “twinkle” in Austen’s eye as the novel unfolds – that twinkle that I didn’t see as much in Mansfield Park or Persuasion. Emma Woodhouse is not necessarily as likeable a character as some of Austen’s other heroines; however, Emma’s snobbery comes across like a character from Seinfeld. Yes, we know about her selfishness but she’s going to make us laugh, anyway.

Then there’s all the carrying on about minutiae: how to have the best ball and who writes the best letters – more reminders of Seinfeld. Whoever said Jane was ahead of her time wasn’t kidding.

For me, though, the funniest aspect of the novel was the long-running “gag” about Harriet Smith. Harriet goes from an Emma-protege to an Emma-annoyance all because of Emma’s own doing.

It made me laugh out loud.

I read Emma for the Jane Austen Read-All-Along hosted by James over at James Reads Books.

7 thoughts on “Emma by Jane Austen”