“When I went to college, which was supposed to make you feel, you know, uplifted, I felt like my loafers were screwed to the floor. The other students would ask these questions that made the professors pause and reflect, and they’d see symbolism without having it pointed out, but I just couldn’t conceive of anything beyond what I saw on the page. I kept thinking there was some explanatory brochure I’d forgotten to pick up during registration. Or maybe it was because they all lived in dorms and I lived at home. Those other girls probably sat around in the halls with their hair in rollers and talked about symbolism.”

In Barbara Kingsolver’s “Stone Dreams”, Diana goes on a trip to the Petrified Forest with her boyfriend, Peter, while her husband, Nathan, is at an eye doctor conference in Hawaii and her daughter, Julie, is visiting her grandmother in Kentucky. 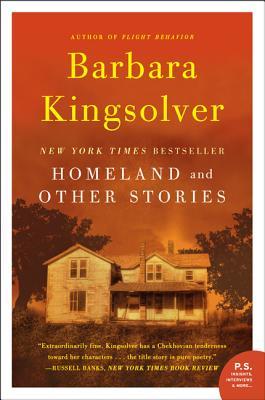 Diana tells the story and gives all kinds of great insights (see the quotation above) about her life, her daughter, and the two men with whom she is currently involved. Most of these insights are told to Peter about Nathan; however, she will stop and point out to the reader what she thinks of Peter.

Throughout Diana’s story, it’s not difficult to feel that she might be blaming the men in her life, specifically her husband, for her life’s lack of excitement or for her inability to mobilize any ambition – but she never quite gets there. That’s probably because I’m not convinced that the men are doing the stifling. Yes, Nathan’s interest in rocks (hence, the title) might take center stage in their marriage but I don’t think he is forcing her to have the same interests. She doesn’t have anything else so she gives in to the rocks.

I’m fascinated with Kingsolver’s ability to write conversations that are “conversational” but also give depth to the characters in the story. I feel like I’m hearing something casual until I finish the story and realize it was so much more.

“Stone Dreams” is included in Kingsolver’s collection Homeland and Other Stories which I borrorwed from my public library. I read it when I selected the Three of Clubs for Week 16 of my Deal Me In 2017 short story project. My Deal Me In List can be found here. Deal Me In is hosted by Jay at Bibliophilopolis.