“Oh, Jake,” Brett said, “we could have had such a damned good time together.”

After reading Ernest Hemingway’s novel The Sun Also Rises for the third time, I found that the ending still gets me. When it comes to romance, I’m a sucker for ambiguous less-than-happy endings. The unrequited passion between Jake Barnes and Lady Brett Ashley encompasses all of the post-World War I disillusionment of the 1920’s – the war being the reason they are not together.

Reading it this time around, I was well aware of the personal nostalgia I feel for the novel. I read the novel when I was a sophomore in high school and while it was not the first Hemingway novel I read (that would be For Whom The Bell Tolls which I read the summer before tenth grade), it was the one that made me a solid fan of his writing. Up until tenth grade, I was mostly a science fiction and fantasy reader (not that there’s anything wrong with that!) but reading Hemingway, and The Sun Also Rises specifically, was the first time I realized there could be something more than plot that intrigues me about a novel – such as simply how the author puts words together or what they say or don’t say. 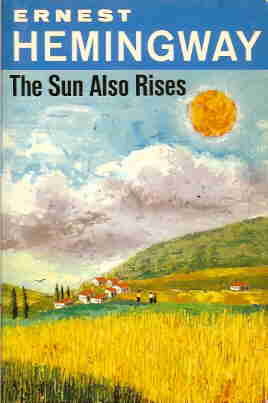 As well as noticing what I have always liked about the novel, certain things jumped out at me as “new”. In my previous readings, I didn’t realize how much humor Bill Gorton provides with his joking and sarcasm. His every line is a good chuckle. And then I stumble on this little lecture given by Bill to Jake. I didn’t remember it, either:

“You’re an expatriate. You’ve lost touch with the soil. You get precious. Fake European standards have ruined you. You drink yourself to death. You become obessed by sex. You spend all your time talking, not working. You are an expatriate, see? You hang around cafes.”

At the time of writing this, perhaps Hemingway didn’t include himself in the group of expatriates with whom he would become associated? Perhaps he found reason to criticize them with this little jab? Close to a century later, though, it’s almost as though he is lecturing himself through Bill Gorton – a small example of life imitating art.

I was prompted to read The Sun Also Rises again in preparation for reading Lesley M. M. Blume’s recent book Everybody Behaves Badly: The True Story Behind Hemingway’s The Sun Also Rises. Look for another post about it sometime in the near future.

2 thoughts on “The Sun Also Rises”