They told stories about her and every story was spoken in a reverent way, as if now that his great-aunt was dead she’d once more been transformed back to her true self.

“Into the Gorge” is the first work I’ve read by Ron Rash. It’s included in my copy of Degrees of Elevation: Short Stories of Contemporary Appalachia edited by Charles Dodd White and Page Seay. I read it when I selected the King of Spades for Week 6 of my Deal Me In 2017 short story project. My Deal Me In List can be found here. Deal Me In is hosted by Jay at Bibliophilopolis. 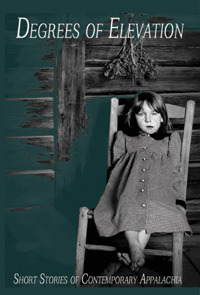 Sixty-eight year-old Jesse enters the gorge that had been in his family for two centuries. Around fifty years ago, his father sold it to the government to be turned into a state park. Jesse anticipates seeing the “homestead” even though it is only a burned down cabin with a half-standing chimney. He also stumbles onto his father’s crop of ginseng – also around fifty years old and apparently worth more than marijuana.

In the process of finding his old home, he commits a crime. A crime that is neither accidental nor premeditated. As he makes his way through the gorge running from authorities, I couldn’t help thinking of various television crime dramas. Rash helps put most of my sympathies toward Jesse but I would find myself wondering why Jesse made the choice he did.

The powerful parts of “Into the Gorge” come with Jesse’s remembrances of his great-aunt who was elderly when Jesse was a boy. One of the more heart-breaking memories shows his great-aunt hoeing her garden even when she was no longer able to plant anything. Ultimately, the woman wanders off to the gorge and is found dead.

I’m not one to try to find symbolism in every detail of every story I read, but it does seem that this gorge represents both home and death – or maybe a home that one can’t really go back to outside of death.