It was an exquisite figure of a woman, and though sadly stained by the soil and the mold of ages, no eye can look unmoved upon its ravishing beauty. The nose, the left leg from the knee down, an ear, and also the toes of the right foot and two fingers of one of the hands were gone, but otherwise the noble figure was in a remarkable state of preservation.

Mark Twain skewers the art world in another short short story “Legend of the Capitoline Venus”. It’s set up similar to a play where a starving artist is unable to get permission from the love of his life’s father to marry her. The reason is, of course, he doesn’t make enough money as a sculptor. The artist’s more “practical” friend finds a way for him to make money. 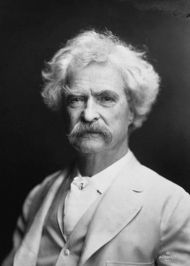 As usual, its very funny and while the art world gets most of the satirizing, I would say that the broader idea of which Twain is trying to poke fun is how “the masses” can be so easily duped.

At the end of the story, Twain references the Cardiff Giant or the Petrified Giant. A hoax that apparently made quite a sensation in Mark Twain’s day even though I don’t hear much about it today. Twain also used this hoax in his story “A Ghost Story” which I posted about here.

While technology may have changed drastically since his time, I can’t help but think that Twain would still have a lot to make fun of today. Speaking of hoaxes and forgeries in the art world, a fascinating documentary came out a couple years ago called Art and Craft.  It boggles the mind how easily people can be duped.