She turned away in disdain and left the room; and since that time there is one episode in our life which we never refer to. Hence the tide of our days flows by in deep and untroubled serenity.

As I said last week, I’ve been waiting for this story all year because the title is one of the stranger and funnier ones I’ve seen.  In reviewing the table of contents in my The Complete Short Stories of Mark Twain, I noticed that a few titles contain the McWilliamses so I’m guessing this couple might show up in more than one story. 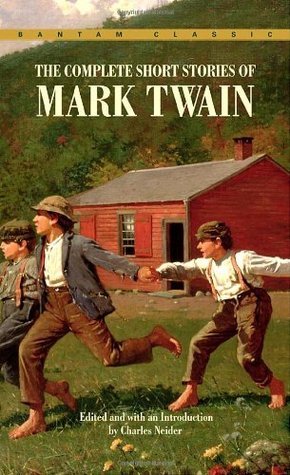 Twain’s portrayal of Mr. and Mrs. McWilliams manages to satirize both marriage and parenthood.  As their small child makes a few minor coughs, Mrs. McWilliams flies into a whirlwind of worry. Mr. McWilliams then makes some attempts to appease her even though each attempt is thwarted by his wife.

Mr. McWilliams tends to be the “voice of reason” much perhaps the way Twain himself would be. The narrator actually relays the story to the reader as it was told to him by Mr. McWilliams unlike many of Twain’s other stories that are narrated by a fictional version of the author.

It’s possible that Twain might also be making fun of wealthy people because the McWilliamses have a full-time nurse that takes care of their kids and during Mrs. McWilliams flurry of dread that their child has something terminal, the family seems to fly from one room to another in a house that apparently has many rooms. While the satirization of the rich may be more subtle, it’s rather humorous thinking of wealthy people being so helpless.

2 thoughts on “Mark Twain: Experience of the McWilliamses with Membranous Croup”