…and all these lower hills were bare of life, unless one might fancy that the far-off processions of pines against the sky, marching up the northern sides of the divides, had a solemn personality, going up like priests to a sacrifice, or that the restless river, flowing through the midst of all and bearing the light of the white noonday sky deep into the bosom of the darkest hills, had a soul as well as a voice.

It’s a pioneer story in which a family living out in the middle of Idaho, essentially secluded, is visited by a group of men working on the new railroad.  I don’t know why, but whenever strangers appear to pioneers in stories I get a sense of impending doom – as though all strangers are dangerous or bad.  In this story, my sense isn’t exactly wrong, it’s simply misplaced.

The men befriend the family and their leader, Kirkwood, takes a liking to the oldest daughter, Ruth, who is already betrothed to one of the few men living in the area. Ruth seems to reciprocate Kirkwood’s affection; however, neither of them completely express their feelings due to Ruth’s upcoming marriage.

Foote portrays Kirkwood in a likeable manner, a little on the suave side but not arrogant. Ruth is a little more subdued in her struggle between what she wants and what she feels she is supposed to do.

The story ends with a sacrifice that is both beautiful and tragic.

While “A Cloud on the Mountain” is not included in the book shown below, based on this story, I think Foote’s “reminiscences” could be intriguing. 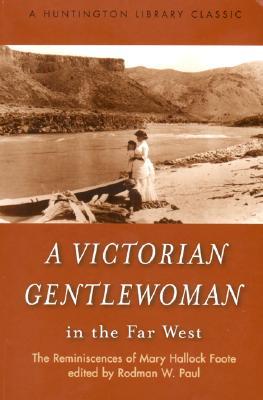 3 thoughts on “Mary Hallock Foote: A Cloud on the Mountain”