It was impossible to regard her as a perfectly well-conducted young lady; she was wanting in a certain indispensable delicacy.  It would therefore simplify matters greatly to be able to treat her as the object of one of those sentiments which are called by romancers “lawless passions.”

So is the puzzle that Daisy Miller is to Frederick Winterbourne in Henry James’ novella Daisy Miller (which I am shamelessly counting as an entire book).  The question Winterbourne, who I enjoyed probably more so than the title character, tries to decipher is whether Daisy doesn’t know any better and therefore acts flirtatious, non-conforming, ill-mannered and what I get the feeling James considers overall American or does Daisy know exactly what she is doing.

While Winterbourne never has a real relationship with her, he doesn’t seem to be able to stay away from her.  An American himself, he appears to at least understand European society and manages to “fit in” but he follows her all over Europe while she hangs out with an Italian gentleman who is just as smitten with Daisy. 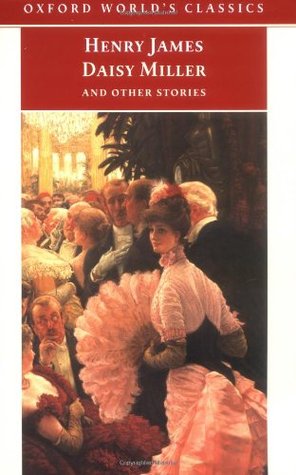 I haven’t read much of Henry James; however, I very often forget that he is considered an American author – an American author who spent much of his writing career living in Great Britain.  It’s just as much of a puzzle to me as to whether James is using this story to criticize American culture via the uncouth Daisy or glorify the rudeness of America when compared to the stuffiness of Europe. Because he was an American living in Europe, I lean toward the former, but can’t exaclty pin it down.