For the July edition of Bradbury of the Month, I picked up another collection of Ray Bradbury stories, One More for the Road, that I found at the library and settled on his story “The F. Scott/Tolstoy/Ahab Accumulator”, the intriguing title being the main reason for selecting it. 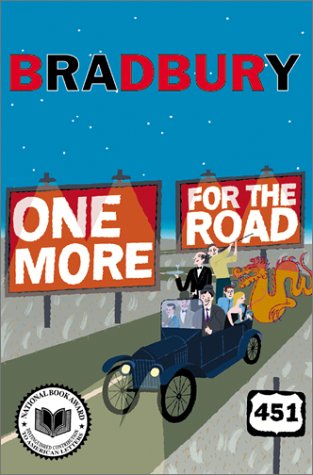 It shouldn’t come as a surprise to any Bradbury fan that this story involves time travel and the time machine looks much like a butterfly.  The narrator of “The F. Scott/Tolstoy/Ahab Accumulator” determines that he will use the machine to try to change the lives of some great writers of whom at least several died not realizing how great they would eventually be considered.

Yes, the story is a tad gimmicky and just a tad sentimental; however, Bradbury makes it work.  And in a turn both humorous and amazing, Bradbury manages to write in the same style as the author being visited but still make the story flow and still make the story completely his own.  The time traveler’s conversation with Ernest Hemingway contains short, choppy remarks without indication of who is saying what.

Anyone who loves books and loves reading is going to at least appreciate the sentiments the narrator explains to those he visits and achingly wonder if something could have changed for these writers.  He does manage to “change history” in one instance.

In his best Melville, Bradbury writes a wonderful paragraph about libraries:

…it firms a man’s bones, brightens his eye, tunes his ear.  Thus a man is renewed breath by breath, when he swims the library deeps where multitudinous blind creatures wait.  Your mind says rise and they swarm, overbrim, drown you with their stuffs.  Drowned but alive, you are the atoll it floods without end.  Thus, you are no mere reader, but a survivor of tides that surf from Shakespeare to Pope to Moliere.  Those lighthouses of being. Go there to survive the storms.