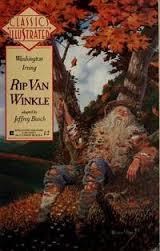 These are things I remember from the first time I read Washington Irving’s “Rip Van Winkle” about eight years ago:

– Rip Van Winkle has quite the shrew for a wife. This is a fact that isn’t necessarily included in many of the children’s versions of the stories that are out there.  Rip easily accepts his twenty-year nap realizing that his wife died during this time. The story becomes both dark and funny at this point.

– Published in 1819, “Rip Van Winkle” gives lasting descriptions of the landscapes of a new world and new country.   Some of which may still exist today and some of which may not:

From an opening between the trees he could overlook all the lower country for many a mile of rich woodland. He saw at a distance the lordly Hudson, far, far below him, moving on its silent but majestic course, with the reflection of a purple cloud, or the sail of a lagging bark, here and there sleeping on its glassy bosom, and at last losing itself in the blue highlands.

These are things I did not remember from the first time I read “Rip Van Winkle”:

– The American Revolution occurred during Rip’s twenty-year nap.  This makes me curious about Washington Irving’s politics when writing the story.  However, this could simply be a comic device.  When I think about it, taking a nap and missing a revolution is hilarious.

-In a brilliant effect, the reader doesn’t realize Rip has been asleep until he wakes up – much like Rip himself.

If you have not read “Rip Van Winkle” I highly recommend it.  If you have read it, go ahead and read it again, it’s still great!