That night he froze to death on Powder River’s bitter west bank, that stream of famous dimensions and direction – an inch deep, a mile wide and she flows uphill from Texas.

Annie Proulx’s “The Blood Bay”, set in the 1880’s, begins with a group of cowboys stumbling across a man who has frozen to death in the Wyoming winter.  Any story that has someone freezing to death is going to remind me of Jack London; however, so far, Proulx’s writing brings to mind London in theme and style, also.  In this story, the man who dies alone is only the catalyst for a very short and darkly comic tale.

One of the cowboys takes a liking to the dead man’s boots and his grisly manner of removing them as well as his encounter with the horse that gives the story its title sets the stage for a great punchline.  Just as in some of London’s stories, the fun and games inside a warm cabin provide a stark contrast to the wicked cold outdoors.

I would recommend this story to anyone wanting a quick introduction to Proulx’s work. 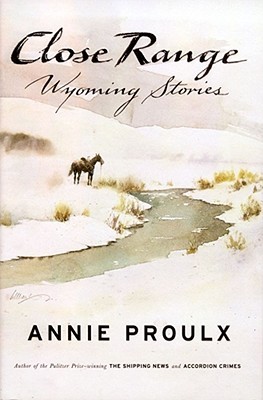