The weakness of the masculine element in Barry’s Ford was laid low before such strenuous feminine assertion.

Mary E. Wilkins Freeman’s short story “Old Woman Magoun” (published in 1891) works on several levels that blend together in a manner that continues to make me think about it.  I read it when I selected the Six of Spades for Week 18 of my Deal Me In 2015 short story project. 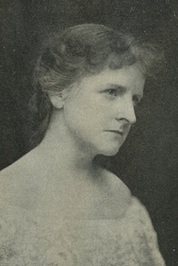 Perhaps the title itself represents the levels the story contains.  The first word “Old” could signify the story’s theme of lost childhood or lost innocence.  Old Woman Magoun lives in Barry’s Ford somewhere in New England with her granddaughter, Lily.  Lily’s mother (Old Woman Magoun’s daughter) died during childbirth and Lily’s father is a prominent figure in Barry’s Ford and doesn’t want anything to do with Lily.  Lily and her grandmother live a decent life together until Lily’s father realizes that Lily is fourteen.  Much is made of the fact that Lily continues to play with a doll.

The second word “Woman” might point to the gender conflict in the story.  Freeman does not portray men positively here. Lily’s father wants to marry her off to a friend as payment for a poker debt. Old Woman Magoun has no use for men or the work they do.  Men build a much needed bridge over Barry’s Ford’s river that doesn’t live up to Old Woman Magoun’s expectations.  She could have done it better.

This story is included in my anthology The Oxford Book of American Short Stories edited by Joyce Carol Oates.  My Deal Me In 2015 list can be seen here. Deal Me In 2015 is sponsored by Jay at Bibliophilopolis.