What do you do when one of your literary heroes was not always the most decent of human beings?  For me, I’ve managed to hold on to what perhaps amounts to a paradox – an artist is both eternally attached to their work as they are eternally separated from it.  A work of art both stands with its artist and on its own.  I don’t find it difficult to appreciate and value Ernest Hemingway’s work and his ability as a writer while acknowledging what seems to be his numerous character flaws.

Paul Hendrickson’s biography Hemingway’s Boat covers Hemingway’s life starting in 1934 when he purchased his much loved yacht Pilar immediately after returning from a hunting trip in Africa with his second wife Pauline.  Hendrickson weaves hunting, fishing and writing along with Hemingway’s realtionships (family, friends, enemies and otherwise) into a real and fascinating story.  The book contains plenty of un-sugarcoated evidence proving the stereotype of Hemingway’s less than congenial personality; however, Hendrickson goes to great and well-documented lengths to show a Hemingway that could go against stereotype, also. 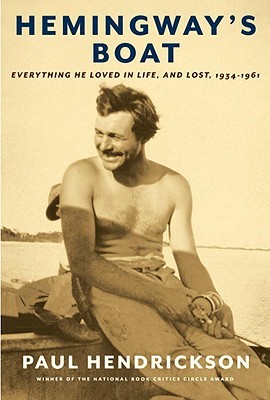 The book only briefly mentions Hemingway’s life prior to 1934 so The Sun Also Rises and A Farewell To Arms as well as his first wife, Hadley, don’t take center stage.  I found it interesting that his third wife, Martha Gelhorn, attains only minimal attention, too.  On the flip side, Hemingway’s two most enduring novels from this time period, For Whom The Bell Tolls and The Old Man and the Sea, don’t get much focus, either.  I found it intriguing that Hendrickson spends much of the book pointing out the events of Hemingway’s life that influenced his lesser known and lesser acclaimed novels Green Hills of Africa, Across the River and Into the Trees, and the posthumously published novels Islands in the Stream and Garden of Eden.

I also did not realize how many memoirs have been published by members of the Hemingway family.  Hendrickson often sites the memoir of Hemingway’s son Gregory, Papa, as well as How It Was by Hemingway’s fourth wife, Mary.  Two of Gregory’s children wrote little known but critically acclaimed memoirs – John Hemingway wrote Strange Tribe and Lorian Hemingway wrote Walk on Water.

Hendrickson writes with both sympathy and honesty about his literary idol and I would recommend this book to anyone on whom Ernest Hemingway’s writing has had an effect.