What do you do when you are reeling from the death of your husband (this is sounding familiar) and his estranged friend that you thought had been killed in his own politically motivated bombing suddenly sends you a letter asking you to come visit him in a remote part of Minnesota?

If you are Sophie in Joyce Carol Oates’ title story from her collection Sourland – you go. 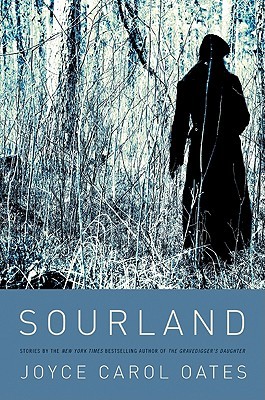 At 70 pages, this is the longest Oates story I’ve read.  It’s not long because of an intricate plot but more because of great attention to detail in the form of flashbacks to the death of Sophie’s husband along with beautiful and haunting descriptions of Minnesota’s Sourland. Kolk, the husband’s friend, gets his own descriptive attention as Oates lends her skills to the facial scar caused by the bombing.

The plot itself simply involves Sophie’s trip to visit Kolk in a lonely cabin on the wintry landscape.  Numerous situations make the reader want to scream “Don’t go in there!” or “Stay away!” but, just as in horror movies, Sophie doesn’t listen to the reader.

Sophie’s thoughts and feelings, though, about her husband’s death give the reader a little more to think about than the typical horror movie:

Still the wave of love for him flowed into her, like an electric current.  She could not bear it, how she loved this man: the connection between them, that was in danger of breaking. Suddenly it was a possibility, the connection might be broken. Such desperate love Sophie felt for her doomed husband yearning and insubstantial as a tiny flame buffeted by wind. Such desperate love, she had to hide her face from him, that he wouldn’t see, and chide her.