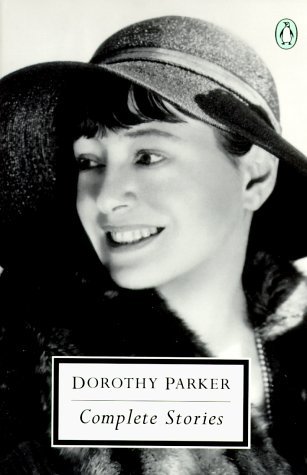 “We have been married,” he said, “exactly two hours and twenty-six minutes.”

I thought Dorothy Parker’s short story “The Waltz” was one of the most hilarious stories I read in 2014.  This week (Week 5 of Deal Me In), I read her story “Here We Are” and I think it’s even funnier.  My Deal Me In 2015 list can be seen here.  Deal Me In 2015 is sponsored by Jay at Bibliophilopolis.

The entire story is set on a train as a newly married couple head to New York City for their honeymoon. The nervousness is apparent on the parts of both the bride and the groom with the title phrase being thrown out during awkward lulls in the conversation.  The poor groom continuously puts his foot in his mouth giving the bride just enough reason to accuse him of looking too long at one of her bridesmaids or of not liking her family. I get the distinct impression that the bride isn’t really worried about what her new husband thought – she just doesn’t know what else to say.  With the “wedding night” looming large on the horizon, the husband does his best to dance around the topic that is foremost on his mind.

There was a silence with things going on in it.

3 thoughts on “Dorothy Parker: Here We Are”