DEAL ME IN WEEK 1 – SEVEN OF HEARTS

It’s Week 1 of Deal Me In 2015 and it couldn’t start off better than with a short story by Kurt Vonnegut!  I drew the Seven of Hearts which corresponds to one of Vonnegut’s better known stories and one of his best – “Harrison Bergeron”.  I read this story previously when I read the collection Welcome to the Monkey House.  Reading it again only made it that much more enjoyable. 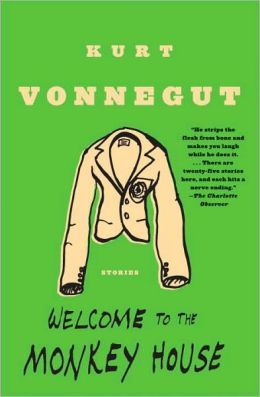 Much of Vonnegut’s work includes either social commentary or humor.  With “Harrison Bergeron”, both are blended almost perfectly.  Harrison, the son of George and Hazel Bergeron, is arrested for not going along with the government regulations of the year 2081. These regulations are designed to keep everyone average and the “same”.  Thinking too much isn’t tolerated. As George and Hazel watch a ballet on television, the program is interrupted by Harrison (on television), who, for a brief moment, is able to provide a glimpse of beauty, a sneak peek at human potential and what art can be when it’s unhindered by the government.

Vonnegut’s wicked humor shines throughout the story.  The methods in which the government keeps people from thinking would be scary if they weren’t so funny.  As I read the story, I can easily imagine the twinkle in Vonnegut’s eye.  I don’t know if there is such a category as dystopian comedy, but “Harrison Bergeron” would belong to it.

Since I’m a sucker for comedy, I’ll end this post with the story’s final lines, an “average” conversation between George and Hazel:

“Gee – I could tell that one was a doozey,” said Hazel.

“You can say that again,” said George.

Incidentally, prior to this post, Kurt Vonnegut was in a three-way tie with Jack London and Ernest Hemingway for most tagged author on my blog.  He now pulls ahead of his two “colleagues” by one tag.