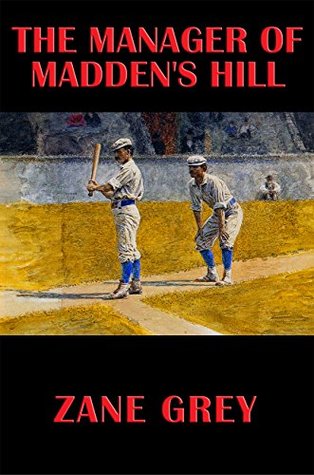 He could never play baseball. But he had baseball brains. He had been too wise for the tricky Stranathan. He was the coach and manager and general of the great Madden’s Hill nine. If ever he had to lie awake at night again he would not mourn over his lameness; he would have something to think about. To him would be given the glory of beating the invincible Natchez team.

Zane Grey’s “The Manager of Madden’s Hill” is more of the baseball story that I’ve been looking for.  I was a little disappointed earlier this year with his “The Redheaded Outfield”.  “Madden’s Hill” has all of the details of a close game that I still consider an amazing feat for an author to think up in his head let alone write down on paper.  But there’s a little more than just the game.  The characters in this story are kids playing in some sort of organized league but not quite as organized as Little League.  The Madden Hill team is led by eleven year-old Willie “Daddy” Howarth. Daddy’s character is brilliantly developed.  In spite of his inability to play baseball, he is the quintessential coach and his players respect him:

Willie’s knowledge of players and play, and particularly of the strange talk, the wild and whirling words on the lips of the real baseball men, made him the envy of every boy on Madden’s Hill, and a mine of information.

The story reminds me of a bygone era when kids played baseball just for fun on a sandlot. That, in itself, made it worth reading.

4 thoughts on “Zane Grey: The Manager of Madden’s Hill”