For Week 42 of my Deal Me In 2014 project, I drew my third wild card, the Two of Hearts.  I chose a short story from Salman Rushdie’s collection East, West: Stories.  The collection contains nine stories: three relating to the Eastern world, three the Western world and three that are a combination of the two.  The story I selected is from the West section: “Christopher Columbus and Queen Isabella of Spain Consummate Their Relationship (Sante Fe, AD 1492).”  My Deal Me In 2014 list can be seen here.  DMI is sponsored by Jay at Bibliophilopolis. 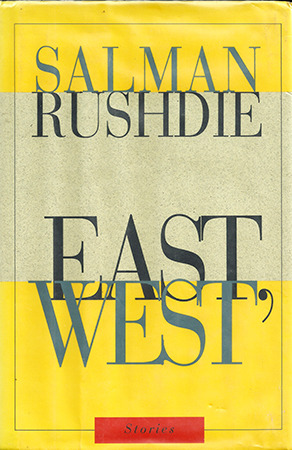 I am amazed at how well Rushdie develops his fictional characters of Christopher Columbus and Queen Isabella of Spain in so few pages.  I think the title is longer than the actual story.

He portrays Queen Isabella with all of the emotional complexities that come with being an absolute monarch set on taking over the world – known or unknown.  Christopher Columbus is suave and sophisticated on the outside.  Inside, he is the crazy person wandering in the wilderness wanting to sail off the edge of the world.

What does Columbus request of Queen Isabella?  Consummation.  Is it consummation of a business deal that will give him the means to accomplish his mission to the world’s edge?  Is it the more traditional, well-known meaning of consummation?  That’s the question and there is no exact answer.  Does it matter?

In spite of the subject matter, Rushdie handles the story very delicately and perhaps even modestly.  A sweetness exists to the relationship between the two historical figures – a sweetness in a world-domination sort of way.