One of the great things about book blogging is getting exposure to authors that I might not otherwise read.  This year Katherine at The Writerly Reader has been reading stories from The Barnum Museum by Steven Millhauser.  I grabbed a copy of this collection at the library and have read two of the stories so far.

The first one was “The Sepia Postcard”.  If nobody already has, I will dub Millhauser the “king of details”.  His protagonist gets away from a problem relationship to a sleepy seaside resort (I’m guessing New England because there are references to lobster) where he wanders around by himself in a funk.  Fantastic descriptions abound of the gift shops, the rare book store, the bed and breakfast, the meals, his room, the shopowners.  All of these details add up to a “this is what it comes down to” attitude for the lonely visitor.  He wheels and deals, but not to his benefit, and buys a sepia postcard.  As he continues his stay, the postcard appears to change.  I couldn’t tell whether the postcard was actually changing or was it simply reflecting what this lonely man was feeling.  He saw what he wanted to see.  I think the reader can decide what they want to see, too.  For me, the story worked either way.  It reminded me a little of a William Trevor story.  The plot was not intricate, but I could get inside this guy’s head. 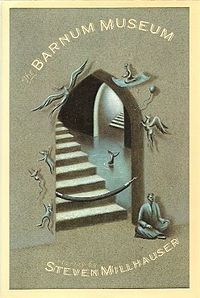 The other story, “Klassik Komix #1”, started out to me as a gimmick, but ultimately became more.  Gimmicks aren’t bad if they are well-done and this one certainly was.  Instead of the trend to put prose stories into the form of comics as graphic novels, Millhauser takes a comic book story and puts it into prose.  Each panel is described in comic book detail (more great details) and a story unfolds about Alfred becoming a “Lobster Man” (more lobster, too).  Occasionally, Alfred  thinks (designated by a balloon with little bubbles leading from Alfred to the balloon) or speaks (designated by a balloon with a little pointy thing pointing in Alfred’s direction) with lines that sounded very familiar to me, including a panel where women are talking about Michelangelo. I finally googled one of the lines and realized why.  It  also gave me an idea as to Alfred’s last name.  I’ll just say that it involves T. S. Eliot.  At the end of the story, Alfred sits down to write – a poem perhaps or maybe a love song.  A prose comic book, lobster man and T. S. Eliot combine for an unusual story, but one that works brilliantly for me.

I have several short story collections that I’ve been reading for several years.  Kurt Vonnegut’s Bagombo Snuff Box and F. Scott Fitzgerald’s Tales of the Jazz Age.  I don’t know why I tend to take my time in reading short story collections other than I don’t want them to end.  The Barnum Museum might fall into this category; however, some of the stories sound interesting.  One of the titles is “A Game of Clue”.  I don’t know if I can wait to find out what Millhauser does with this.

2 thoughts on “Two by Steven Millhauser”