A priest, a mystic and a skeptic walk into a bazaar.  Actually, there are several skeptics and a few mystics and, as usual, for G. K. Chesterton’s Father Brown mysteries, not everything is as it appears in “The Red Moon of Meru”.   These characters have names like Lord and Lady Mounteagle, Hardcastle, and Tommy Hunter.  All of these characters begin the story in conversation about the fortune tellers at the bazaar.  Much is made of what is real and what is not real.  Illusion is a major theme in this episode.  What is in the eye of the beholder and what is cold, hard fact are questions debated between everyone including Father Brown. 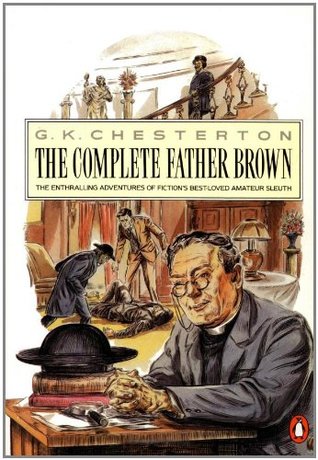 They all make their way to the museum owned by Lord Mounteagle to look upon his prized ruby from India known as the Red Moon of Meru.  As Mounteagle allows his guests to handle the gem, the reader gets an idea of what is going to happen.  When one of the guests accidentally (or a little too coincidentally, in my opinion) lays the stone on a window sill, everyone sees an unknown hand, or perhaps a sleight of hand, snap it away.  After an initial struggle among some of the guests, Father Brown begins to figure out what happened.  At the same time, the ruby mysteriously reappears right where it was.

This story lacked the very quotable Chesterton that I enjoy; however, I appreciate the manner in which the ending veered from the standard detective story.  All of the guests leave with the impression that the stolen ruby was simply an illusion.  They all saw what they wanted to see.  Of course Father Brown knows the truth but he lets everyone leave without knowing it – everyone except his detective friend disguised as a phrenologist (someone who tells the future by the configuration of one’s skull).

I suppose it’s not completely beyond the realm of possibility for a priest-detective to stumble across a repentant thief?

7 thoughts on “G. K. Chesterton: The Red Moon of Meru”