By selecting the Queen of Spades for Week 35 of my Deal Me In 2014 project, I finished out my Melville summer with the fourth story by this great author. My Deal Me In 2014 list can be seen here.  DMI is sponsored by Jay at Bibliophilopolis.  Just for the record, 70 pages of Melville is NOT a short story.  It’s my own fault for not checking first.  His story “Benito Cereno” is included in my collection called Billy Budd, Sailor and Other Stories.  That’s “other stories” not “other short stories”.   No, it wasn’t an entire novel, but it took me a longer time to get through than the other stories on my Deal Me In 2014 list.  But I digress… 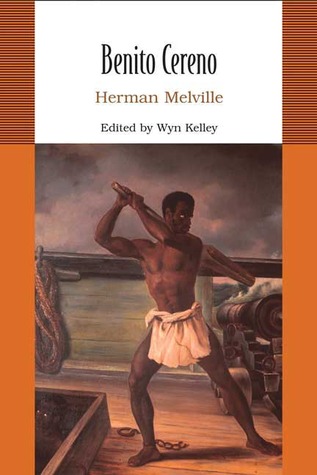 “Benito Cereno” is just as masterful as the other Melville works, both long and short, that I’ve read.  An American ship, the Bachelor’s Delight (an interesting title), is anchored at an island off the coast of South America when a beleaguered Spanish Ship, the San Dominick,  feebly makes it’s way to the island’s coast.  The American Captain, Amasa Delano, boards the Spanish ship with peaceful greetings.  He meets the Spanish Captain, Benito Cereno, and understands that the ship is carrying African Slaves.

The scenes that take place are ones of mystery and confusion on the part of Delano.  Benito Cereno’s faithful servant, Babo, waits on the Spanish Captain hand and foot.  Delano, though, begins to sense that not all is as it appears.  To go further, would ruin the story for anyone who has not read it.

From online commentary on Wikipedia, this story has been considered both racist and anti-slavery.  Ambiguous enough to be fascinating.  A scene that has stayed in my mind and doesn’t give away any of the plot occurs during Delano’s initial visit to the San Dominick.  While there, he observes a female slave feeding her child.  Through Delano’s eyes, Melville, in his detailed prose, compares the woman and child to a doe and a fawn and ascribes goddess-like attributes to her.  I realized, though, that what Delano doesn’t see is an actual woman, an actual human being.  I think the uncertainty that may come into the critical interpretation of this story is a result of the reader not knowing who is doing the thinking and observing, Delano or Melville.  I would caution any reader to read the entire story before making any determinations.  What Delano thinks and observes makes for a powerfully uncomfortable story.