Continuing on with my August reading of Barbara Tuchman’s The Guns of August, I’ve finished the  section of her book called “Outbreak”.  It starts with this fantastic paragraph:

“Some damned foolish thing in the  Balkans,” [Otto von] Bismarck had predicted, would ignite the next war.  The assassination of  the Austrian heir apparent, Archduke Franz Ferdinand, by Serbian nationalists on June 28, 1914, satisfied his condition.  Austria-Hungary, with the bellicose frivolity of senile empires, determined to use the occasion to absorb Serbia as she had absorbed Bosnia and Herzegovina in 1909.  Russia on that occasion, weakened by the war with Japan, had been forced to acquiesce by a German ultimatum followed by the Kaiser’s appearance in “shining armor”, as he put it, at the side of his ally, Austria.  To avenge that humiliation and for the sake of her prestige as the major Slav power, Russia was now prepared to put on the shining armor herself.

Everything that Tuchman explains in the preceding sections of the book gives the impression that, while Germany knew Russia would be involved in the next war, they had not planned on the war starting with Russian involvement.  However, with Russia’s aggression, France became certain that Germany would use this as reason to invade. 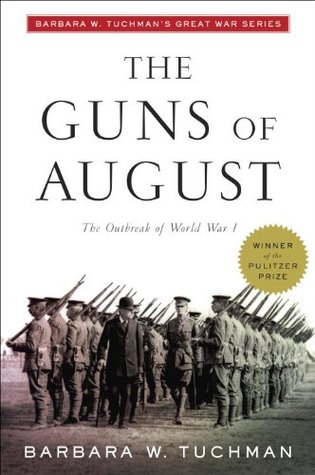 The “conversations” between the European nations at this point are fascinating.  England debates as to whether to get involved.  I couldn’t help wondering what it would have been like if England had remained neutral.  I didn’t wonder very long.  Speaking of neutrality, Tuchman especially paints an intriguing picture of Belgium located geographically between Germany and France and proverbially between a rock and a hard place.  Belgium’s desire to maintain their achieved neutrality and independence makes their King Albert one of the historical figures about which I’ve been the most curious.  Considered a great outdoorsman and a voracious reader, the author’s opinion is that Albert would have been on the same level as Winston Churchill and Theodore Roosevelt if he had not been more introverted than the other two.

While Austria’s Archduke is traditionally considered the “trigger” that started The Great War, plans had been in place for a while.

Barbara Tuchman died in 1989.  It would be interesting to get her opinion about the effects of World War One on world events since then.   I’ll take suggestions on books out there on that topic.  I realize that the conflicts in the Balkans that occurred in the 1990’s have roots going back even farther than World War One.

Meanwhile, Tuchman’s “bellicose frivolity of senile empires” remains one of the more brilliant metaphors in the book.

Here is my previous post.   The final section of the book is about the battles that took place in August of 1914.  Look for a post about them soon.

3 thoughts on “The Guns of August – Outbreak”