In what could be considered a departure in my reading, I began Barbara Tuchman’s Pulitzer Prize winning book The Guns of August this month.  In part, because of the 100th anniversary of the beginning of World War I and in part, because I’ve realized that I know very little about The Great War as opposed to World War II.   In picking a favorite time period for fiction, I would have to say early twentieth century; however, my knowledge of one of the major events of that time period is severely lacking.  In F. Scott Fitzgerald’s earlier short stories and The Great Gatsby, though the War doesn’t take center stage, it’s something everyone is “coming back from”. 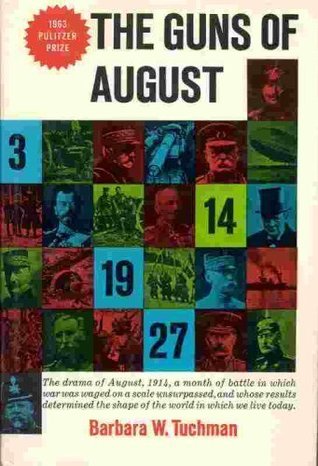 Tuchman begins the book brilliantly by using the May 1910 funeral of England’s King Edward VII to give the reader a snapshot of Europe, in particular, and the world, in general, at that time.  Nine monarchs ride in the processional representing most of Europe – many of them are also related in some way to the King.  No longer President, Theodore Roosevelt attends to represent the United States.  By using documented incidents in flashback form, Tuchman gives the impression that the wheels are already turning in the German Kaiser’s head as to how more power could be obtained for his country (or for himself).  While maintaining a public demeanor of confidence, the other European monarchs have private fears of German hegemony (I had to look up the word “hegemony”.  Learning a new word is always a good thing).

Tuchman proceeds to the section she calls “Plans”.  I’m sure I am sounding a little naïve when I say that I was surprised at how the countries of Europe, especially Germany, had such detailed plans for war so far in advance.  Germany knew that any war would have two fronts for them – the east with Russia and the west with France.  France seemed to be Germany’s primary foe but if they invaded France, they knew Russia would become involved.  It had not been that long since Russia had been at war with Japan (another war I know little about) so Germany counted on Russia taking longer to mobilize.

Without turning the book into “historical fiction”, the author rounds out all of the players and keeps the reader involved wondering what might happen next – even if the reader might be more familiar with this part of history than I am.  At this point, Belgium and it’s King Albert have caught my interest and the “cause” of the War’s outbreak comes as somewhat of a surprise even if this is the one event that I am familiar with.

I am taking this book slow so The Guns of August will probably run into September for me.  Look for another post in a week or so.

14 thoughts on “The Guns of August – The Funeral and Plans”