It’s week 13 of my 2014 Deal Me In project (Sponsored by Jay at Bibliophilopolis).  That means we are a quarter of the way through the year – which in some ways is hard to believe.

This week I drew the four of diamonds which brought me to John Steinbeck’s short story “Junius Maltby”.  While the story flowed relatively well, for me it was divided into three parts. 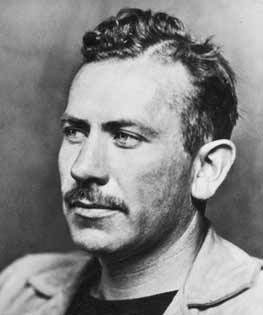 For the first part, Steinbeck introduces the reader of the story to Junius and his family, making the point that Maltby is a reader and a reader of fiction at that, specifically enjoying Robert Louis Stevenson.  Steinbeck proceeds to connect Junius’ reading to his laziness.  Maltby is somewhat of a free spirit and while the garden needs weeding, he tends to have his nose in a book and his feet in the pond.  Tragedy strikes part of his family – while he’s reading.  In some ways, I bristled at this first part because I really wanted Steinbeck to paint a man who reads in a better light – but he didn’t.

In the second part, Junius’ free-spiritedness rubs off on his young son, Robbie and his hired hand, Jacob, who doesn’t work and isn’t paid.  The three of them enjoy pretending they are characters in Stevenson stories until the school board decides it’s time Robbie gets an education.  Robbie’s imaginative activities make him the envy of the other kids and Robbie himself becomes quite the little man on campus.  Robbie’s teacher even begins to enjoy the Maltby farm.  At this point, it appears Steinbeck is making a case for children playing and using their imaginations.  However, those pesky things like food and clothes, or the absence, thereof, become emphasized to a great degree by the school board – and in some ways, by Steinbeck.

Here’s part three: As though Maltby had never noticed their lack of food or clothes, at the urging of the school board, he suddenly realizes that he should be providing for Robbie in a more material manner and so they set off to San Francisco.  At which point, Junius indicates to Robbie’s teacher that for twenty years prior to the farm, he had been an accountant.  AN ACCOUNTANT!?

There is always that proverbial book club question “How did this book resonate with you”?  I have to say that reading and hanging around the “farm and pond” as an alternative to accounting resonates with me significantly more than I want to admit.  Thanks, Mr. Steinbeck.