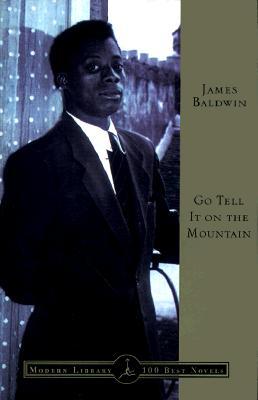 The storm that raged in him tonight could not uproot this hatred, the mightiest tree in all John’s country, all that remained tonight, in this, John’s floodtime.

James Baldwin’s novel Go Tell It On The Mountain reminds me of a Flannery O’Connor story.  It’s raw, gritty, gut-wrenching, but underneath is a compassion and a wisdom that explodes along with the rage of the fourteen year-old protagonist, John Grimes.

The structure of the novel grabbed my attention as much as the characters and plot.  The “present time” of the novel takes place over the course of one evening, a Saturday night tarry service at a Pentacostal church in 1930’s New York City, and makes up the first and last chapters.  In between, three chapters flash back to the lives of John’s relatives – his Aunt Florence, his father, Gabriel and his mother, Elizabeth.

The flash backs flesh out the reasons for John’s anger, especially the anger towards his father.  The “sins of the fathers” theme runs throughout the characters’ histories.  As the novel progresses, the reader becomes aware that John’s rage, whether for better or worse, will require an outlet and a resolution.

…in the storm – was something-something he must find.  He could not pray.  His mind was like the sea itself: troubled, and too deep for the bravest man’s descent, throwing up now and again, for the naked eye to wonder at, treasure and debris long forgotten on the bottom – bones and jewels, fantastic shells, jelly that had once been flesh, pearls that had once been eyes.  And he was at the mercy of this sea, hanging there with darkness all around him.

The final chapter brings about this resolution in a way that’s unusual but not necessarily unexpected.  In spite of the circumstances and histories that are out of John’s control, he has a choice to make. This rage is his responsibility.  When all is said and done, and the tarry service is over, I couldn’t help but admire Baldwin’s wisdom in determining who would change and who would not.

Everything I’ve read about this novel includes a quotation by Baldwin in which he says that, this, his first novel, was “the book I had to write if I was ever going to write anything else.”  Baldwin may have had his own rage to deal with and I have a feeling this book may have been his outlet and his resolution.

I will be thinking about this novel for a long time to come.