I’ve come to the conclusion that the internet isn’t the best place to have conversations, discussions, debates or even, let’s face it, arguments about religion or politics.  Don’t get me wrong, I have read some very well-articulated and well-thought out opinions on these topics from varying points of view.  I think the perceived anonymity of the internet, though, takes away the ability or at least makes it more difficult to actually have an exchange of ideas on these topics. 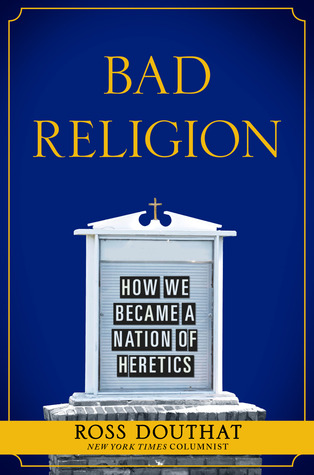 Personally, one of the better places for me to talk about these topics is a pub or coffeehouse similar to how C. S. Lewis, J. R. R. Tolkien and the rest of their group (The Inklings) did it.  They talked about literature and religion – I’m sure politics entered into the conversations from time to time.

That brings me to the book I just finished, Bad Religion: How We Became A Nation of Heretics by Ross Douthat.  In spite of the slightly gruff title, I felt like I was actually sitting at a table with the author discussing his thoughts and ideas.  The premise of his book is to show how the face of much of American Christianity is actually heresy when compared to orthodox (with a small “o”) Christianity.  Douthat is considered a “conservative voice” for the New York Times.  I have a feeling based on his book and knowing his position that he is used to people disagreeing with him.  This seems to have given him good practice in holding his ground on his opinions but also an intelligent understanding of those who disagree with him.  I think both of those abilities shine in his book.

Since I’m not currently at a pub or coffeehouse, I’ll finish with simply saying Douthat’s book is worth discussing with people of all political persuasions.  Just about everyone will find something with which to disagree, but everyone will also find something challenging and worth pondering.  I highly recommend this book for anyone interested in the mysteries of faith and the complexities of politics and how they have intertwined over the last few decades.