For my first short story in my Deal Me In: 2014 project, I picked the Ace of Diamonds which corresponds to Saki’s short story, “The Recessional”.

According to Wikipedia, Saki is the pen name of Hector Hugh Munro, a British author who lived and wrote around the turn of the Twentieth Century.  Wikipedia also mentioned that Rudyard Kipling (among others) influenced Saki’s writing and I would add that “The Recessional” shows the Kipling influence in a big way. 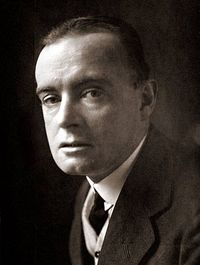 Clovis Sangrail is the author of the poem referenced in the story’s title.  The bulk of the story consists of some rather humorous critique of the poem by Bertie van Tahn.  The names of the two characters are Kipling-esque as well as the poem itself: much ado about elephants and the Himalayas.  I enjoyed the witty banter between Bertie and Clovis but that’s the extent of the story.  No real resolution occurs.

This may not be my favorite story but I would be willing to give Saki another try.  In my research, I realized that he wrote a story called “The Interlopers”.  I have a vague recollection of reading this story when I was in sixth grade.  If my memory serves me right, “The Interlopers” has a Jack London feel to it along with a surprise ending – which could warrant a re-read in the near future.

5 thoughts on “Saki’s “The Recessional””