William Trevor’s short stories have a mood that blends the happy and the sad – blends them into something beautiful and real.  “The Piano Tuner’s Wives” stands as evidence of this. 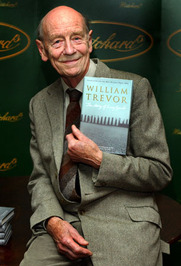 Owen, a piano tuner and blind, married Violet forty years ago.  After Violet dies, he marries Belle.  Forty years previously, he had chosen Violet over Belle.  Belle never married after that rejection and based on the story, never seemed to really get over it.  By most standards, Belle was the prettier woman – but Owen was blind and looks didn’t matter.

The story revolves around descriptions of the two marriages and in usual Trevor fashion, major plot devices are not needed to keep the reader interested.  Violet and Owen complimented each other well during their marriage.  Violet managed to become Owen’s eyes giving him more than adequate words for his imagination.  She also became his driver and propelled his piano tuning business to something more than it would have been without her.

Belle, by all indications, as gracious a woman as Violet, has to live in her shadow.  The shadow, though, seems to be cast more by Belle herself than by Violet or by Owen.  Owen gets two different pairs of eyes to help him see – both in some form or fashion influenced by the other.