I’ve read some of G. K. Chesterton’s non-fiction and found him to be a very quotable author.  I haven’t read as much of his fiction, so I have been looking forward to reading his short story “A Crazy Tale”.  It’s rather quotable, too. 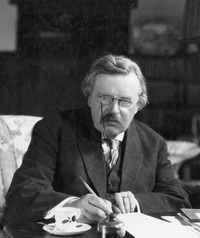 The apocalyptic story is part “Alice in Wonderland” and part “Lucy in the Sky with Diamonds”. The narrator encounters a stranger who tells him a story that he knows nobody will believe.  As the stranger smokes a cigar, he relays the bizarre, dream-like details of this crazy tale.  In the course of the tale, the stranger meets a lady who becomes his wife and encounters the sense of an innocence more child-like than childish.

And since I said Chesterton is very quotable, here are a few quotes from the story:

So I traveled along a road of portents, like undeciphered parables.  There was no twilight as in a dream; everything was clear-cut in the sunlight, standing out in defiant plainness and infantile absurdity.  All was in simple colours, like the landscape of a child’s alphabet, but to a child who had not learnt the meaning.

And here’s another one: