I’ve come to the end of J. D. Salinger’s collection Nine Stories.  “Teddy” tells the story of a ten year-old genius who in many ways seems more mature than his dysfunctional parents. But an old saying rears its ugly head – “there’s a fine line between genius and insanity”.

Teddy travels home from Europe on a ship in 1952 with his parents and younger sister, Booper.  The story implies that Teddy has been interviewed at several prestigious European universities.  A man named Nicholson appears on the ship.  He and Teddy know each other; however, Salinger doesn’t give his readers much detail as to how they are acquainted or why Nicholson is also on the ship.  I have the distinct impression that Nicholson has a psychology degree although he makes a comment to Teddy that he is in “education”. 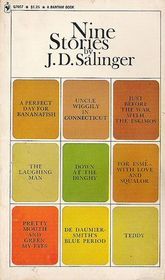 The majority of the story involves Nicholson and Teddy’s discussion about some taped interviews Teddy had with the European university staff.  During these interviews, Teddy discusses his ideas about religion and philosophy.  Teddy believes in reincarnation and tells Nicholson about his previous lives.  Teddy also decides humanity is better off without logic. In fact, he indicates his belief that when Adam ate the apple in the Garden of Eden, he brought all this pesky logic into the world.

As the reader, I can’t help but wonder how Teddy’s philosophy lines up with Salinger’s.  Is Teddy simply a literary device for Salinger’s own ideas?  It’s tempting to see the story that way; however, much like “A Perfect Day for Bananafish”, the story’s ending throws the reader for a loop – not just a plot twist, but an abrupt wrench in the thinking that Teddy’s ideas are the same as Salinger’s.

I highly recommend this collection of short stories; however, I recommend some of the stories more than others with my favorites being For Esme – With Love and Squalor, DeDaumier-Smith’s Blue Period and The Laughing Man.  If you don’t feel like reading the entire collection, try checking these out.

If you have read any of Salinger’s other works involving the Glass family, you will appreciate A Perfect Day for Bananafish and Down at the Dinghy.

The other three, Uncle Wiggly in Connecticut, Just Before the War With the Eskimos, and Pretty Mouth and Green My Eyes, while not my favorite, serve to complete a thought-provoking collection of short stories.  If I would ever reread this collection in the future, I might try reading all the stories at one time.  That tends to be a big question for me when it comes to short story collections: whether to read the whole collection at once or read the stories separately over a long period of time.  I haven’t really perfected any sort of formula as to how to determine which way to go.

Anybody out there have any ideas as to how to read short story collections?