Of Stephen Crane’s short stories (that I’ve read), I would consider “The Open Boat” to be the most like a Hemingway story.  The significant difference would be the length.  Crane’s story is twenty-five pages long.  If it had been a Hemingway story, it would probably be about three pages.  The iceberg theory (read about it here) that is applied to Hemingway would not really hold water (so to speak) with “The Open Boat”.

Four unnamed characters appear to be stranded in a life boat.  The cook, the captain, the oiler and the correspondent take turns rowing and sleeping as they dodge the waves and the wind and make their way to a distant lighthouse.  As they approach shore, they have more problems than they expect getting there.  The big question they continuously ask themselves is why “Fate” would allow them to see the shore, work hard to get there only to drown them in the process – a very Hemingway-like question.  But Hemingway wouldn’t have actually asked the question, he would have just let the reader come up with it on their own. With “The Open Boat”, the narrator explains much of the thought process that goes into the meaning of the story. 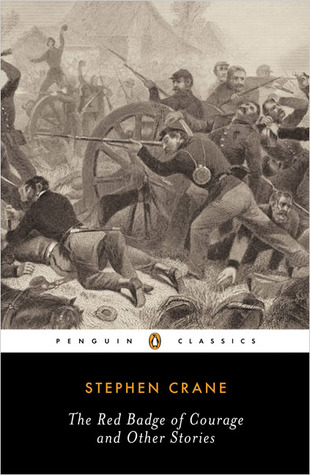 I enjoyed the characters and found their ability to work together impressive.  While “The Open Boat” doesn’t end in quite as devastating a manner as Hemingway’s stories usually do, it’s ending does include a certain amount of sadness.

The Stephen Crane short stories that I’ve read this year come from my edition of The Red Badge of Courage and Other Stories.  I still haven’t read the title story.  It’s still “on my list”.

2 thoughts on “The Open Boat by Stephen Crane”