I’ve found Ishmael, Herman Melville’s Moby-Dick narrator, to have a wonderfully playful irreverence toward religion.  It’s interesting how often he encounters various beliefs, philosophies and worldviews.  I think his irreverence comes from simply calling things like he sees it.  He sums it up so well by saying “I cherish the greatest respect towards everybody’s religious obligations, never mind how comical..”.

Early in the novel, Ishmael finds himself having to share a bed with Queequeg, a pagan cannibal.  While he becomes fast friends with his sleep mate, it’s not without observing Queequeg’s meditation to his baby-god-idol Yojo.  Ishmael concludes this observation with one of the more famous and one of my favorite quotations from the novel, “Better sleeping with a sober cannibal than a drunken Christian”.

In his initial interview with Captains Peleg and Bildad, the owners of The Pequod, the eventual temporary home for Ishmael, he wheels and deals with these Quaker men who put up a tough fight in determining his salary.  He has some fun with the Captains’ manner of speaking using a plethora of ‘Thees’ and ‘Thous’ and finally refers to them as “Quakers with a vengence”. 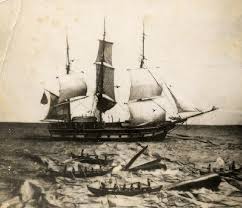 When The Pequod meets with the ship Jeroboam, Ishmael encounters a man who considers himself the Archangel Gabriel.  Ishmael isn’t surprise by the delusions of this man as he was “nurtured among the crazy society of Neskyeuna Shakers.”  Fear of disease keeps the crew of the Jeroboam from boarding The Pequod; however, the Captains of each ship attempt to have a conversation while the ships are lined up next to each other.  The waves and the wind make the ships’ ride a little choppy as well as the Captains’ conversation.

About the time that I’m laughing out loud at the various religious situations Ishmael encounters and his reactions and comments to them, he opts to become serious about his own religious ideas and his interest in whales in a paragraph that I think will become one of my favorites:

And how nobly it raises our conceit of the mighty misty monster, to behold  him solemnly sailing through a calm tropical sea; his vast, mild head overhung by a canopy of vapor, engendered by his incommunicable contemplations, and that vapor – as you will sometimes see it – glorified by a rainbow, as if Heaven itself had put its seal upon his thoughts.  For, d’ye see, rainbows do not visit the clear air; they only irradiate vapor.  And so, through all the thick mists of the dim doubts in my mind, divine intuitions now and then shoot, enkindling my fog with a heavenly ray.  And for this I thank God; for all have doubts; many deny; but doubts or denials, few along with them, have intuitions.  Doubts of all things earthly, and intuitions of some things heavenly; this combination makes neither believer nor infidel, but makes a man who regards them both with equal eye.

One thought on “Ishmael On Religion”