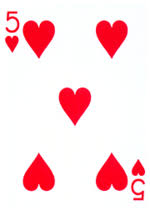 I swear I shuffled the cards!  The luck of the draw (whatever or whomever that may be) decided I needed to read another Oscar Wilde story as last week’s “The Fisherman and His Soul” wasn’t my favorite story.  This time I read “The Selfish Giant” and had a vastly different experience.  In fact, I’m glad I read this one after last week’s because for some reason these stories seem to be complimentary to each other.

This story also is written in fairy-tale style; however, it’s significantly shorter.  The Selfish Giant goes through a redemption process as he allows children to play in his garden.  The Giant’s attitude and heart corresponds and contrasts beautifully to the weather and the seasons  – also beautifully described by Wilde.  I found the Giant’s final meeting with the boy who was “wounded by love” especially moving.  The religious motif that Wilde weaves into the story works because it’s neither preachy nor teachy.

I guess I was more in the mood for the redemption of a giant than a fisherman who loses his soul.  I highly recommend “The Selfish Giant” and I will be reading more Oscar Wilde in the future.