“Pardon me, madam, but I see that you have mistaken me for Adriance Hilgarde. I am his brother…”

Willa Cather’s “A Death in the Desert” struck me as unusual.  I’m finding her short stories difficult to write about, but I’m giving it a try anyway.  Everett Hilgarde physically resembles his brother, Adriance, who has been successful in the field of music.  Everywhere Everett goes people stare at him thinking he is Adriance.  As Everett travels through Wyoming he runs into Katherine Gaylord – who, as one might expect, at first mistakes him for Adriance.  Katherine had once been Adriance’s pupil in Europe.  Given the title of the story, I’m not giving much away in saying that Katherine is dying.  Katherine realizes who Everett is (or rather who he is not) and Everett makes an unplanned extended stay in Wyoming – reminiscing with Katherine about their time in Europe with Adriance. 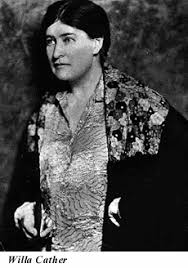 The odd aspect of this story lies in the feelings that Everett has for his brother.  While one might think that Everett would be extremely jealous of Adriance, he seems to consider his lesser stature in life as “just the way it is”.  He depicts Adriance as someone who is somewhat selfish but not unexpectedly so – almost as though a great musician could not help but be selfish.

Adriance does not make an appearance in the story; however, when Everett writes to him about Katherine’s situation, Adriance mails his latest musical composition to Katherine.  This strikes me as a somewhat selfish act but it again seems to make sense – the selfishness of an artist – neither Katherine nor Everett are taken aback by it.

Like the last Cather short story I read, I think this one warrants some extended thinking.

3 thoughts on ““A Death In The Desert” by Willa Cather”