My first draw from my deck of cards was the three of hearts which corresponds to Stephen Crane’s short story “The Bride Comes to Yellow Sky”.  See my page Deal Me In Short Story Project: 2013 for further details.

This is the first time I’ve read anything by Stephen Crane.  He’s known primarily for his Civil War novel The Red Badge of Courage.  My Senior (High School) English teacher called my class a “literary desert” because nobody had ever read this novel.  Guess who still hasn’t? 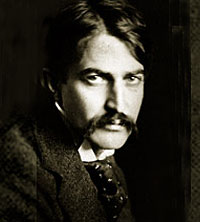 A group of men hanging out at the wonderfully-named Weary Gentlemen saloon tell a newcomer about Wilson’s whiskey binges right as news arrives that Wilson has started on another one.  The whiskey turns Wilson into a gun-slinging hoodlum looking for a fight.  The newcomer is rather nonchalantly told that he might want to grab the floor if Wilson wanders near the bar.  Even though the door would be barred, bullets could still come through.  All of these antics seem to be business-as-usual for the folks of Yellow Sky.

At about this time, Yellow Sky’s marshal, Jack Potter, is arriving by train (with a very ornate dining car that gets described several times) from “San Anton” with his new bride.  Nobody in Yellow Sky is aware that he is married and he is a little concerned that the townspeople will be angry.  I feel a little naive, but at this point of the story I was thinking that they would be angry because they weren’t invited to the wedding.  I don’t think that was the case.  Potter happens to be Scratchy Wilson’s antagonist during the drunken rages.

I enjoyed the scene where Wilson wanders to Potter’s adobe house and waits for Potter to show up.  When he doesn’t, Wilson is a little disappointed at the “immovable” house – it doesn’t make for a very interesting opponent.  When Potter shows up with his bride, Wilson is ready for him – but more disappointment ensues as Potter tells Wilson he currently has no guns on him.  Then comes the biggest disappointment of all:  Potter introduces his bride to Scratchy Wilson.

Crane doesn’t develop Potter’s bride in much detail other than that she is “plain”.  I don’t think this is why Wilson is disappointed, though.  Potter’s bride seems to represent everything that is the opposite of the West as Wilson and the other men of Yellow Sky knew it.  The conflict between Potter and Wilson represented a code that the men lived by.  At times, the code seemed to be a game – but real bullets were involved.  Potter’s fear of bringing his bride to Yellow Sky resulted from the fact that he wasn’t just bringing a wife home, but he was bringing an end to this primal code that was a part of the West he inhabited.

I think the name of the saloon, Weary Gentlemen, had more to do with men weary of being gentlemen than simply gentlemen being tired and needing a place to rest.  I have to admit that I felt a little sympathy for Scratchy Wilson when Potter introduced his bride to him.  I have a feeling Stephen Crane did, too.

5 thoughts on ““The Bride Comes to Yellow Sky””