Mark Twain’s “A Ghost Story” contains his typical humor and down-to-earth view of the world with a slightly scary twist and a little piece of unknown (at least by me) history. 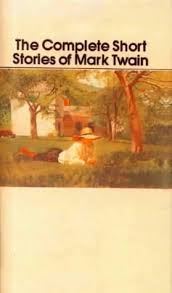 The narrator takes a room in an old, and apparently abandoned, apartment building in Manhattan.  Twain describes the walk up the stairs with tremendous detail and gives the reader a little chill along the way.  Why the narrator decides to live in an old abandoned building never really matters.

For a brief respite, the narrator feels safe and warm from the outside world.  After drifting into a restful sleep, he suddenly awakes to the sound of “elephant” footsteps.  He even finds giant footprints in the ashes by the fireplace.

At last, he comes face to face with the ghost of the Cardiff Giant, after the ghost clumsily breaks most of the narrator’s furniture.  From my understanding, the Cardiff Giant is known as one of the greatest hoaxes of the 19th century.  The giant was a supposedly “petrified” man found near Cardiff, New York.  Put on display by P. T. Barnum, people from all over paid money to see the giant’s remains.  Eventually, the diplay was exposed as a fraud, whether Barnum was in on it or not, I couldn’t determine.  However, I think Barnum was the one who said “There’s a sucker born every minute”? (Excavation of the Cardiff Giant)

Twain has his narrator sit down and chat with the ghost and discover the ghost is trying to haunt the museum across the street to get his remains (on display at this museum) returned to Cardiff.  The narrator reveals to the ghost that his remains are really in Albany-much to the ghost’s confusion.  Now the ghost really doesn’t know what he should haunt.

I chose this story by going down the table of contents in my Twain short story collection looking for something that had to do with ghosts.  The title “A Ghost Story” jumped right out.  I didn’t expect the story to be truly creepy, but I was expecting it to be humorous – and it was.

Is anyone else familiar with the history of the Cardiff Giant?  I wasn’t until I read this story.

4 thoughts on ““A Ghost Story” by Mark Twain”